A few days after my family left Tom’s mom flew in, and a few days after that his sister, Adrienne. It was wonderful to have them and all their help. They kept up the pattern of entertaining Scotter in the mornings while I slept in, and kept me sleep positive by letting me get a nap each day.

Pam was here over Valentines day and so got to join us in making sugar cookies. Scotter was enthralled with the idea of adding flour, and was constantly dipping his hand in the flour bin. He also got a kick out of rolling the dough and cutting out hearts. Mostly, he enjoyed “trying” the sweet and sticky dough. Needless to say, my original intent to share cookies with the neighbors was cancelled by the obvious proliferation of germs caused by Scotter’s help in the kitchen. I wouldn’t have it any other way! 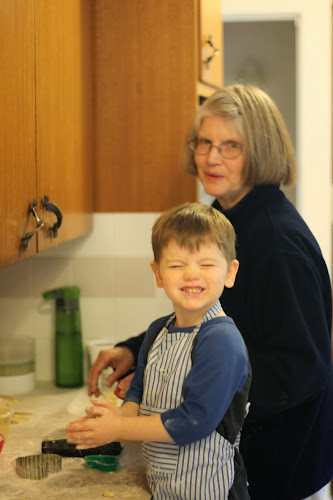 Anders was circumcised while Pam was here. As a result of the procedure, Anders was much more fussy and didn’t sleep as well. I hated seeing him in pain, and Pam was so supportive as we cared for him. (We stopped off at Bakery Nouveau on our way home from the procedure and Man! Their twice baked almond croissants are to die for! Just saying.)

It had been nearly a year since we’d seen Adi, so it was such a treat to have her visit. Her light hearted, happy spirit was contagious. Scotland immediately took to her, and I’d hear them each morning giggling upstairs. Scotland basked in her attention. Adi was always eager to hold Anders and gave him a love and attention that touched me.

Anders and I had our first big adventure to Pikes Market while they were here. It was rainy, but true to Seattle style I put Anders in the Ergo-baby, flipped up the canopy on Scotter’s stroller and headed out. We had some fabulous clam and smoked salmon chowder at Pike Place Chowder- it was far superior to Ivar’s in my opinion. We enjoyed the market and stopped into the original Starbucks for my coffee loving sister and mother-in-law. I was quite sore by the time the morning was over, but it was worth it.

Pam, Adi and Tom enjoyed a few highly competitive scrabble games via their ipads. Scotland was enthralled with the game, and always asked to play with Tom. (Perhaps a new idea for interesting him in letters!) We all enjoyed a few rounds of Settlers of Catan after the boys had gone to bed, which brought back many happy memories. 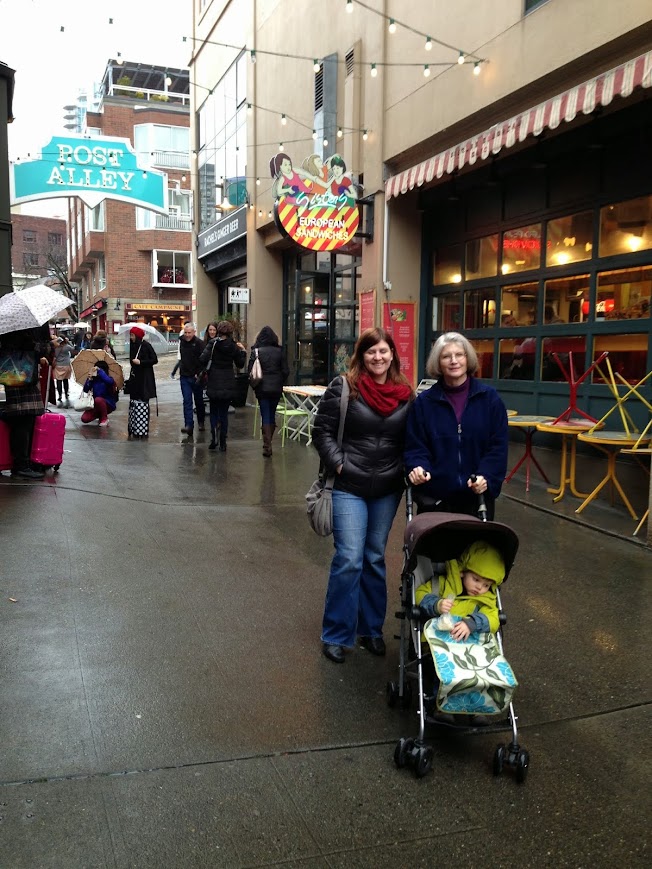 Another day, everyone but Anders and I headed out to Redondo beach and the Tamarind Tree restaurant. While they enjoyed walking along the boardwalk and watching Scotland splash in puddles, I enjoyed having a quiet day at home to get a bunch of things done.

Post-baby visits are always challenging for me because I prefer to be independent but the situation calls for reliance on others. My desire to be a proper host and yet my awareness of my own limitations always results in my being in a bit of a funk. Thankfully, Pam and Adi took me as I was. While I wished we could have gone out and done more, I was grateful for their willingness to make fun at home.