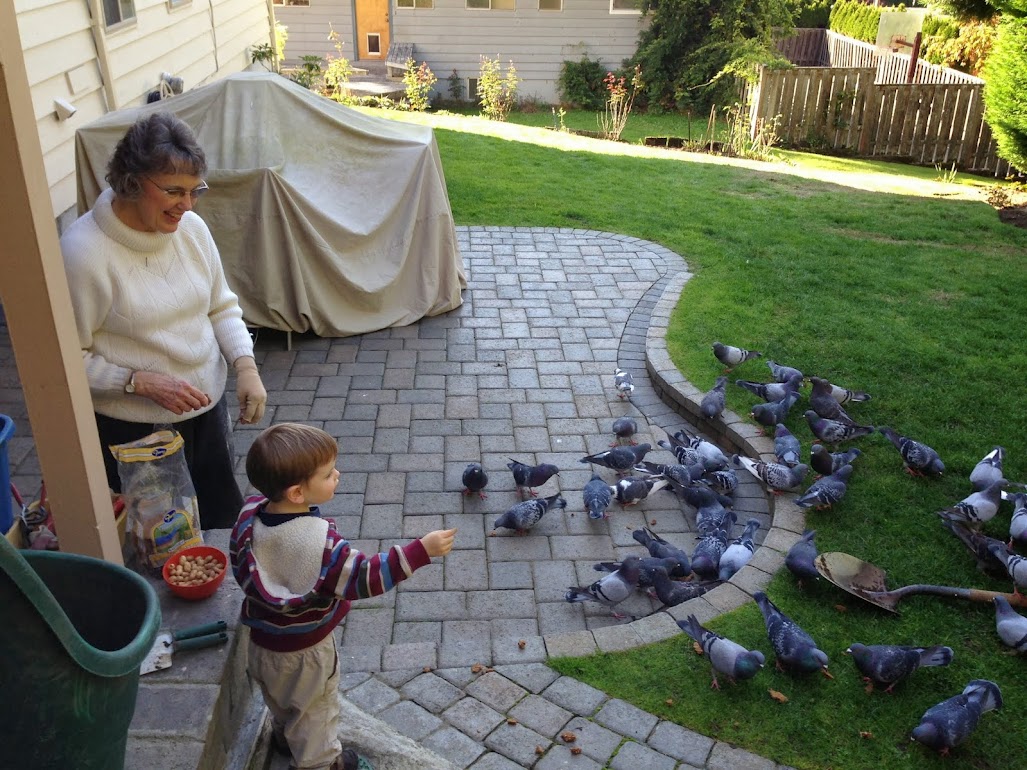 Yesterday afternoon, I had one of the most lovely afternoons I’ve had in a long time. I went over to a woman’s home from my church who had mentioned she had some strawberry plants and gladiolus bulbs that I could have. I figured I would be there fifteen minutes, I ended up staying two hours. The afternoon included collecting starts, volunteers, and overgrowth from several different plants- plum pudding heuchera, campanula, gladiolus, pansies, sweet william, rosemary, peonies, iris, an unnamed shrub, and a dainty groundcover. Peggy taught me how to overwinter begonias. Peggy and Bob Maringer are one of those “salt of the earth” couples. A couple who celebrate their wedding date on the 28th of each month- and have for 30 years. Their overwhelming willingness to share everything and anything they have really touched me. They each gave Scotland such sweet attention, Bob bringing him tootsie rolls, and Peggy teaching him how to throw peanuts to the squirrels and blue jays, and break bread to throw to the pigeons. (They’ve trained all three to visit their yard for food.) Peggy and I waxed on about the joys of dirt and gardening, and she gushed over the history of her beautiful gardens. I was touched by Peggy’s absolutly exstatic response to her recently renovated kitchen. (A very modest renovation, that she waited 30 years to do, even though her kitchen only had about 8 square feet of countertop space before!) It made me wonder- Why do I feel I deserve a kitchen renovation? The way she’d talk so casually about “You’ll just have to wait a few years until. . .” “It only took five years for. . .” made me ponder upon the joy of advanced age- when life is long, and years short. In my youth waiting five years feels extreme and the thought of planting something with the understanding that it will take years before it achieves the state I’m hoping for, seems unworthwhile. And yet, such wisdom and providence lies there.
The afternoon highlighted for me the importance of the elderly in my life. They seem to balance me, bring things into proper prospective, and help me realize that life is long, I can slow down and chill out a little bit. (I’ve been a bit high strung lately!) During my lesson on Sunday Barbara Bradford a twinkly eyed grandmother in my ward said “I just want to let all you young folks know, that missionary work gets easier as you get old.” When I questioned her as to why, she said “Well, you just don’t worry about the backlash.” I suggested maybe age isn’t the only way to achieve the state of mind where you didn’t worry so much about what others think of you. But then again, I’m certainly failing in that category.
This morning as I was studying my scriptures I read several verses about God as our creator. The verses spoke of his endless creations, and I suddenly felt very small, but more importantly very young. As I pondered on their meaning I felt impressed, Kjirsti, you are yet young, accept your youth and don’t beat yourself up. I was reminded of the other day when I was trying to explain to Scotland why I didn’t want him to cross the road on his own. He argued that he had looked for cars, that he ran across fast, that. . . I told him he was small and that cars might not seen him. He insisted “I’m not small! I’m a big boy!” Before me flashed the future debates that would hit this same vein. I told him that he needed to grow taller, and then I said, “Scotland, you’re only two!” I wonder if sometimes Heavenly Father doesn’t look down on us, and smile lovingly, proud of our determination to push beyond our capabilities, but all the same aware that we’re just not “big” enough for certain things. I, like my son, often get frustrated by the limitations of limited life experience. This morning I felt a peace wash over me as I realized there is great contentment in accepting one’s sphere. I needn’t wallow in thoughts of how small I am, but rather recognize that time will bring growth. And that I can’t speed time.
How grateful I am for an Eternal God, and more elderly friends to remind me of my youthful place on the timeline of the eternities.