After our visit with Getti, we returned “home” to see Tom for a few days before I got stir crazy and we headed back out to visit Sabina and my Grandparents in Cache valley. 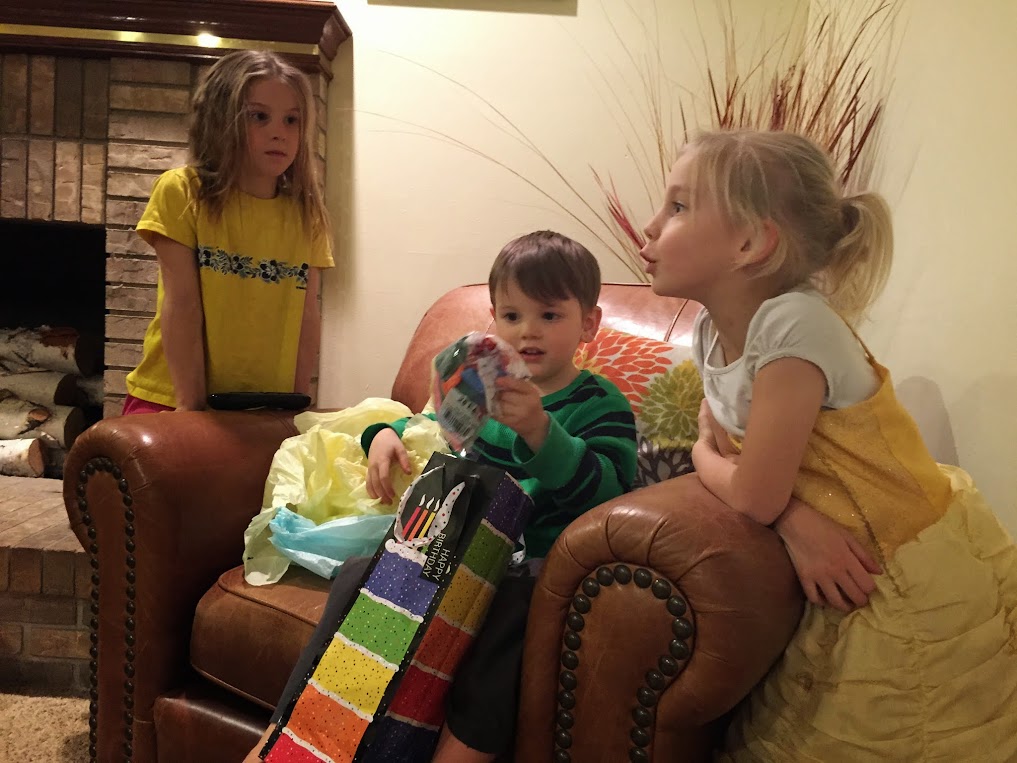 They were sweet to treat Scotland to yet another birthday celebration. (I guess he got four ’cause he’s four!) Really, it was just all of my siblings being amazing aunts and uncles. Their love and attention to my little ones always warms my heart. 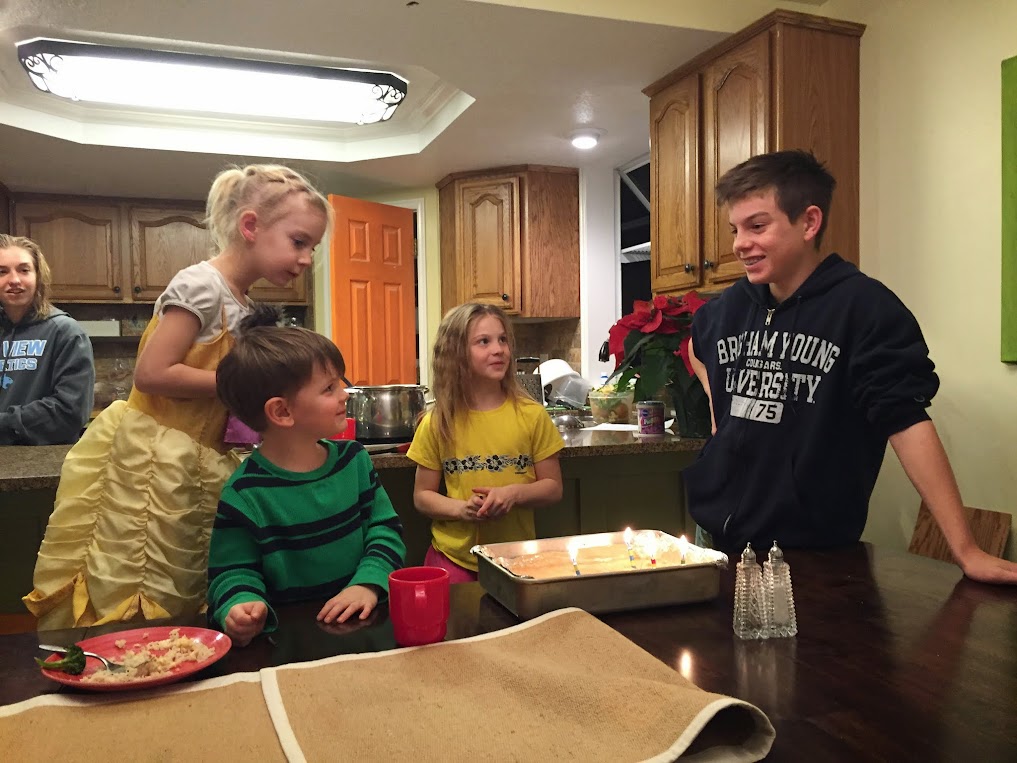 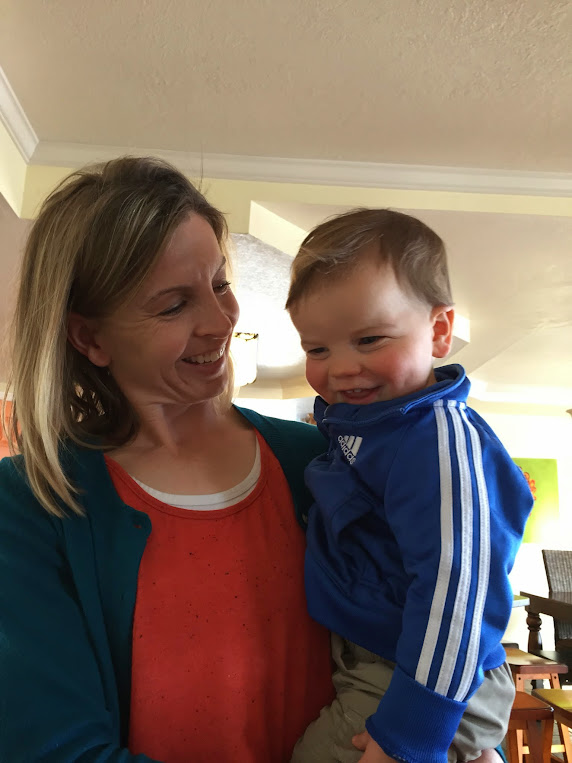 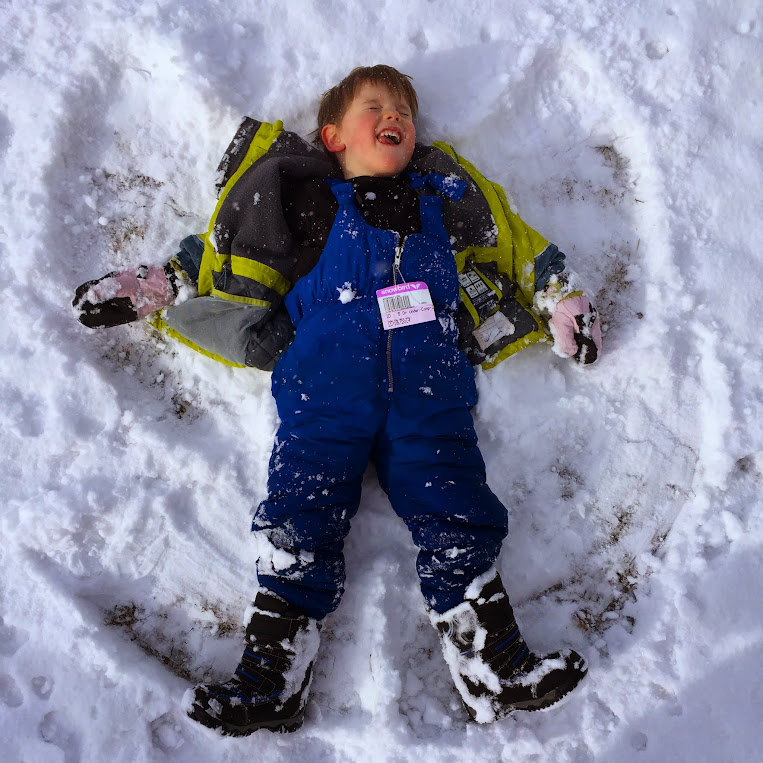 We got a big snow while we were there which was a literal answer to prayer- (The whole valley fasted the day before for snow.) We were thrilled to finally get some snow play in! Sabina suited us up and we headed to a great sledding hill. 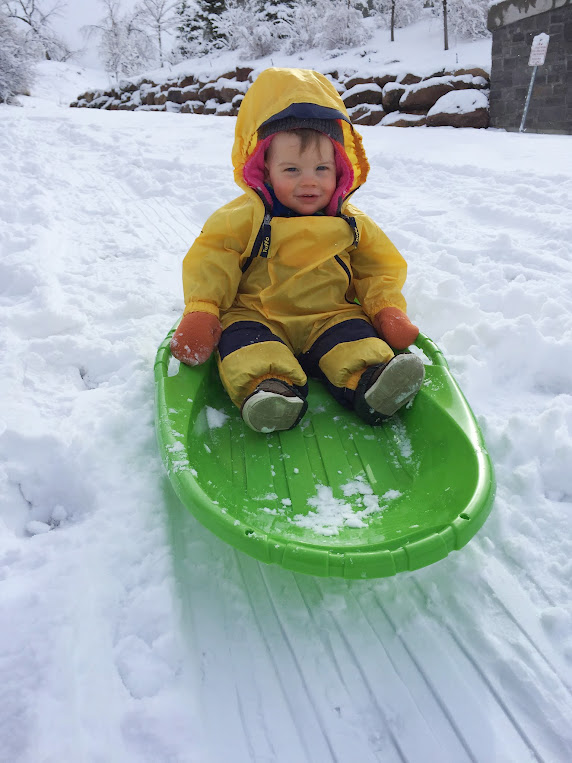 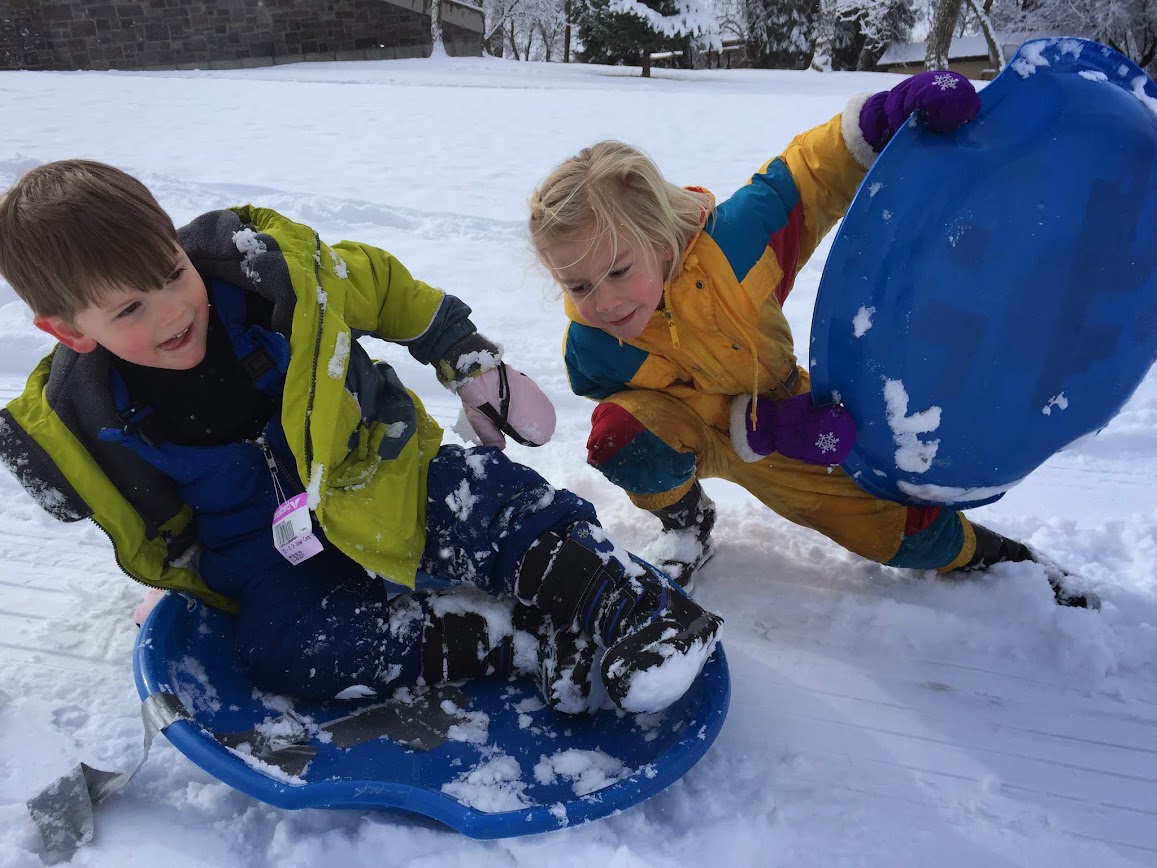 Anders LOVED going down the hill, even when it got fast. He has NO inhibition. As always, I’m amazed at how individual children are. 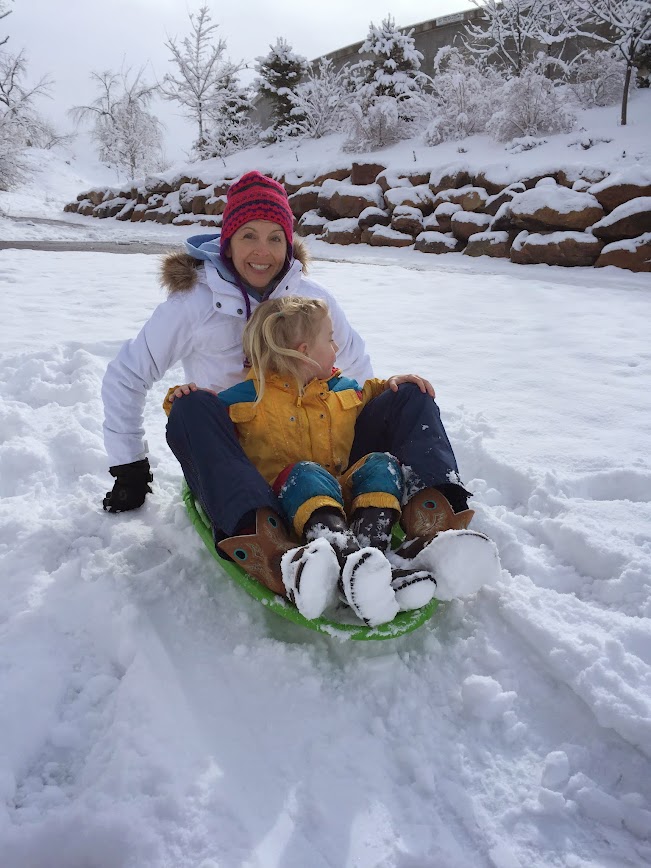 It’s fun to be Seattleites who don’t get snow, because then it’s SO exciting. I guess it’s like Tom who still LOVES rain, because he grew up in Arizona. 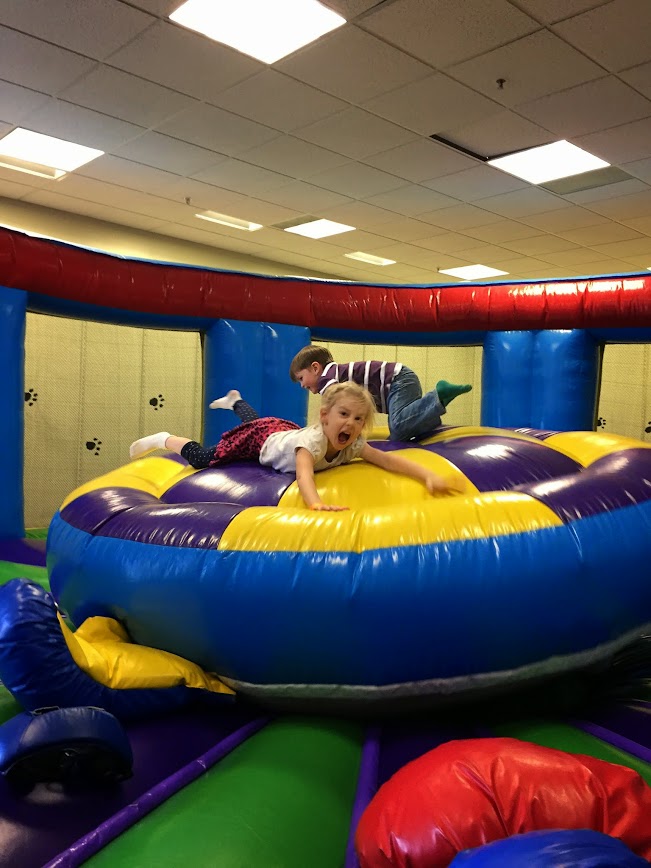 We also took the kids to a big bounce house one afternoon. Rhyse and Scotland were in heaven. And Anders, with his newly acquired walking skills, was happy to follow his brother about, walking between the huge inflated structures. Rhyse and Scotland played so happily this trip. Its the first time its been just the two of them, as we’ve always come up with Brigette’s family, and I appreciated the chance for Scotland to get to know Rhyse a little better. She’s a darling girl.
Rhyse struggles with what some call “intense emotion.” It has really crippled her in the past, but with some research and LOTS of practice Sabina has helped her work through a lot of it. I was really amazed at the transformation within her. She knew when she needed to take “downtime” and has learned to verbalize her needs. Sabina’s patience and creativity with her was truly inspiring, especially because I know what a challenge this has been for her. Rhyse has been a graduate level course in parenting, and Sabina is passing with flying colors! 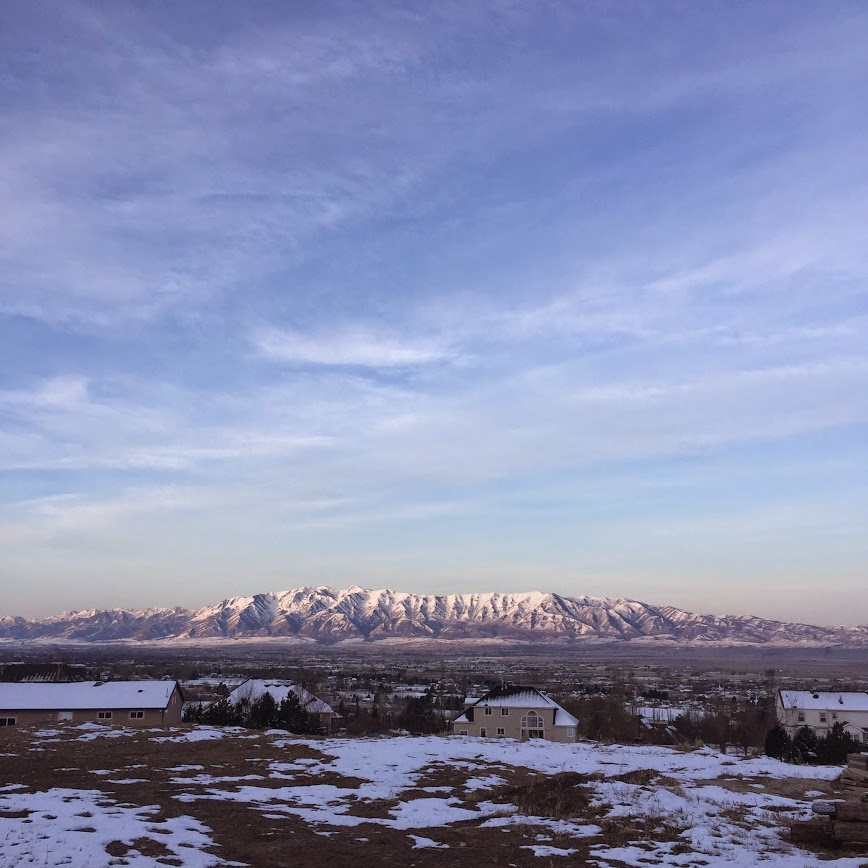 Sabina treated me to a morning walk to myself. The crisp air and exercise felt wonderful, and the scenery wasn’t so shabby either! 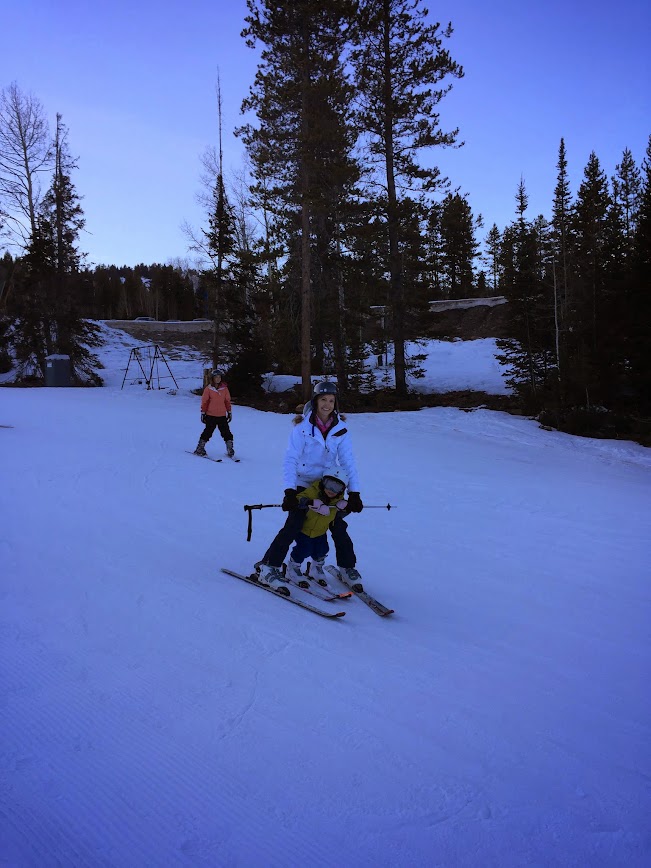 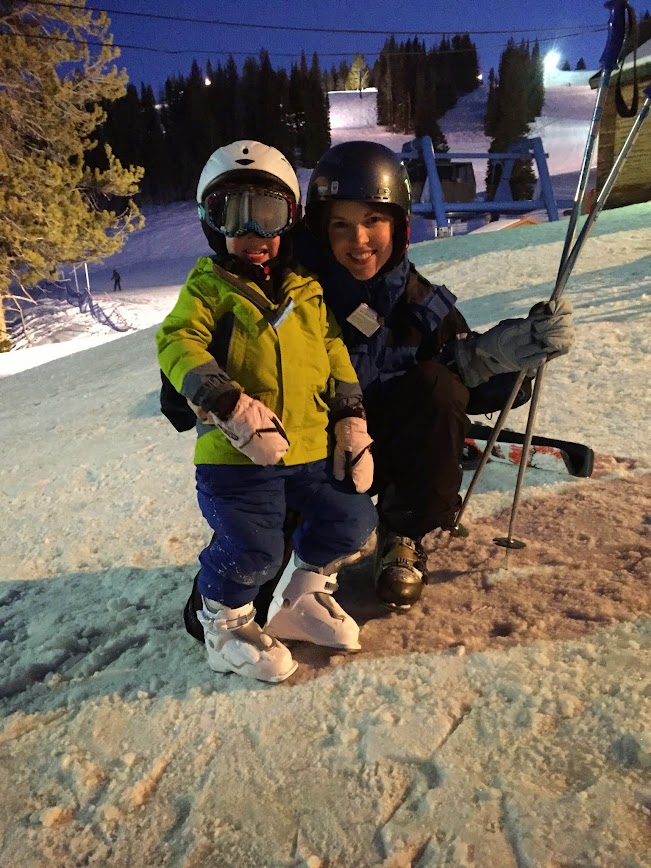 It was their ward’s ski night at Beaver Mountain ski resort while we were there. With cheap rates, and a willing babysitter in my injured nephew, I took advantage of the opportunity to take Scotland skiing for the first time. He was such a champ. Sabina was sweet enough to take him the first several rounds as I got used to being on skis myself (I’d only been once before.) She was so patient and encouraging with him. (He said at the end of the night when he was starting to get tired. “I want to ski with you three more times and then I want to ski with Sabina one more time!”)
He was determined, and quickly picked up the skills to ski on his own, he learned to snow plow enough to slow himself but not enough to stop, so after a few crashes he decided he’d rather hold my hand the rest of the time. Which I didn’t mind at all. Hearing his endless chatter as we moved up the bunny lift. Holding his hand as we moved down the hill. Working together to do something both of us were beginners at. Seeing his smiling goggled and helmeted face. It was a memory I’ll always cherish. 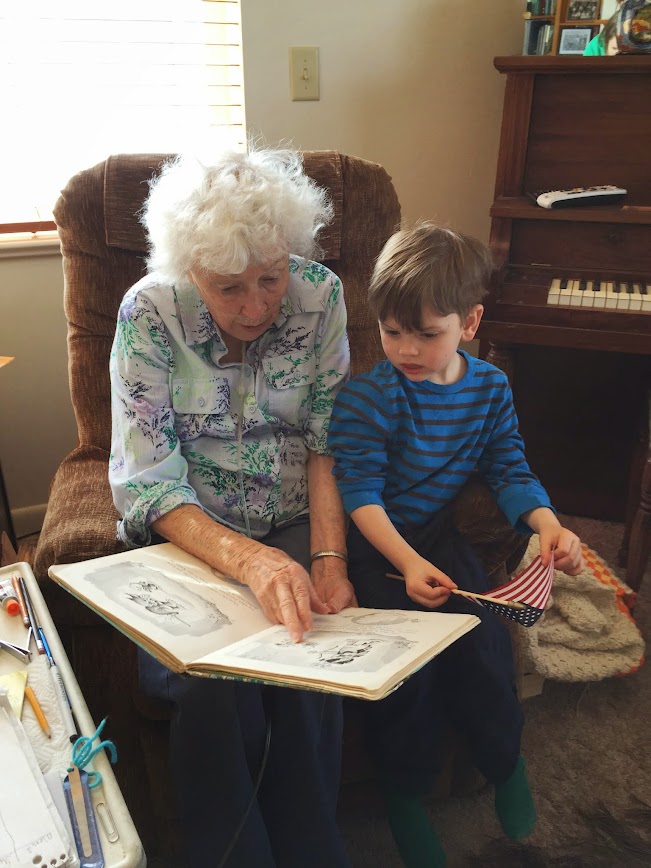 In addition to getting to spend a lot of quality time with Sabina and her family we got to spend a day with my maternal grandparents. It was a lovely day. Grandma read and played with the boys, Grandpa took them out to feed the horses. And I was able to help them a bit with Grandpa’s life history. 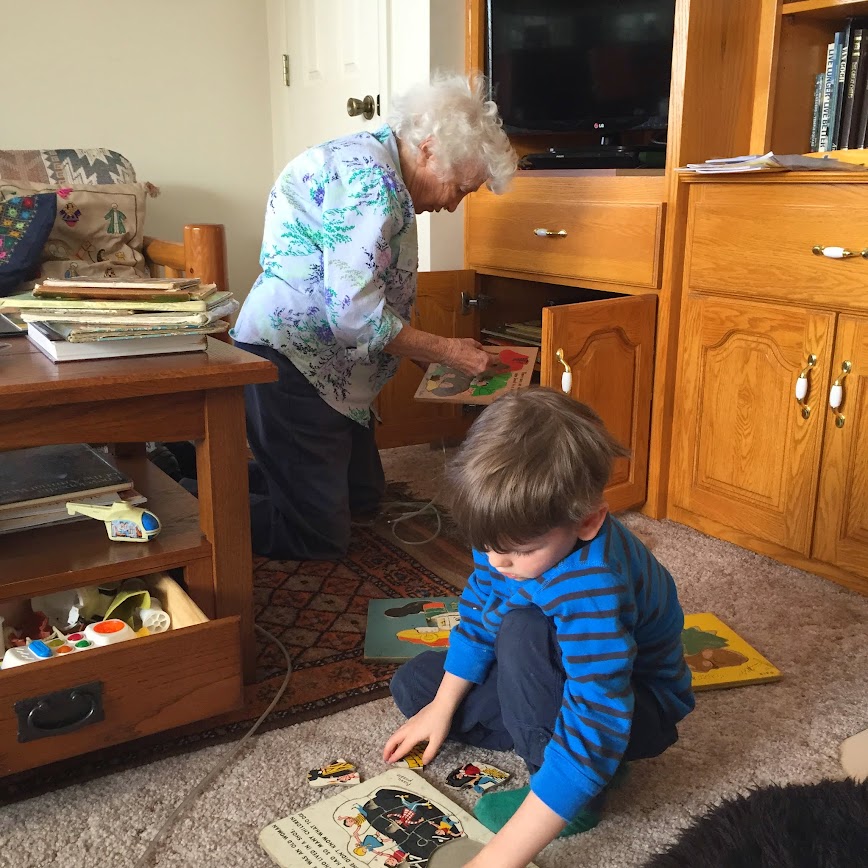 Grandma pulling out puzzles and games for Scotland. 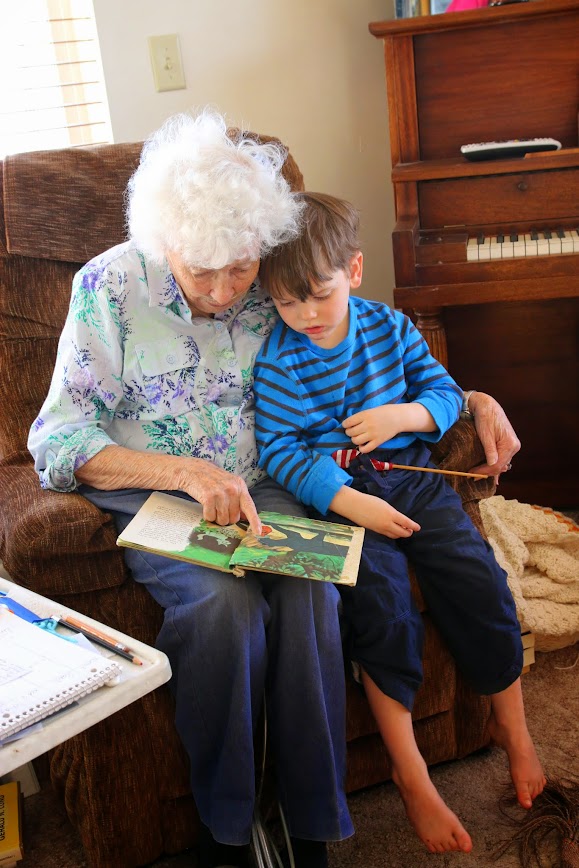 Grandma was doing really well on this visit. She read Scotland several books, narrating expressively and pointing out all the interesting parts of the pictures. She helped entertain Anders while I helped Grandpa write his history, and asked Scotland dozens of questiosn. She was high spirited and jovial, it was wonderful to see her and feel of her loving spirit. 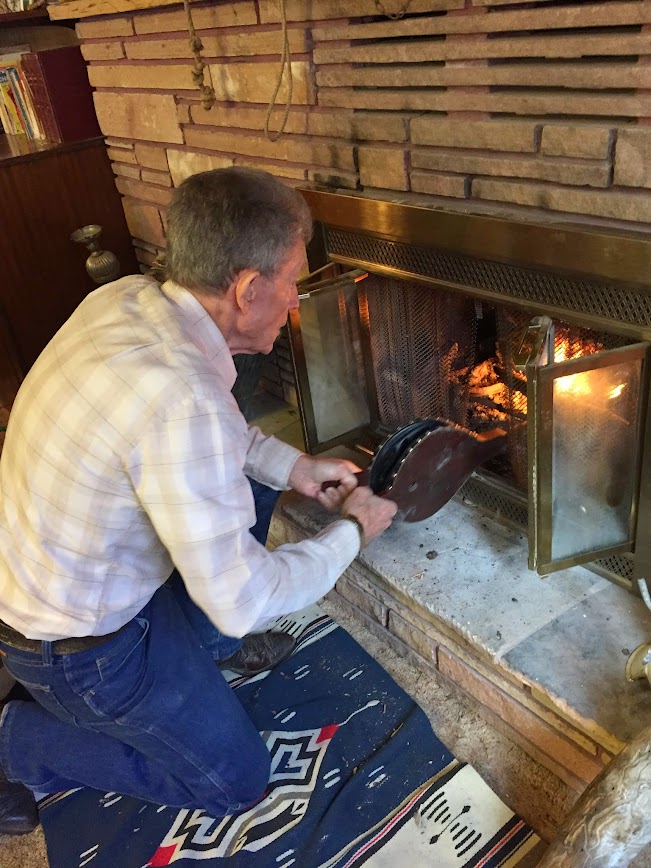 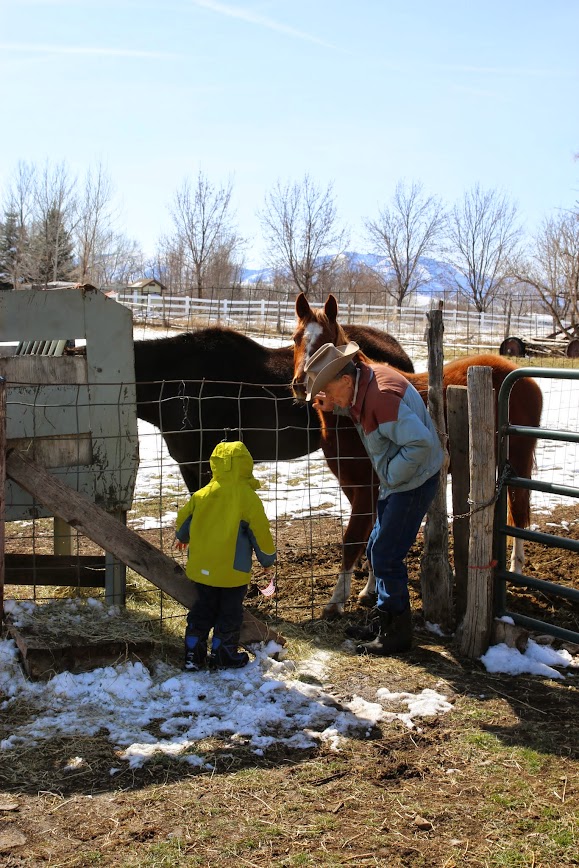 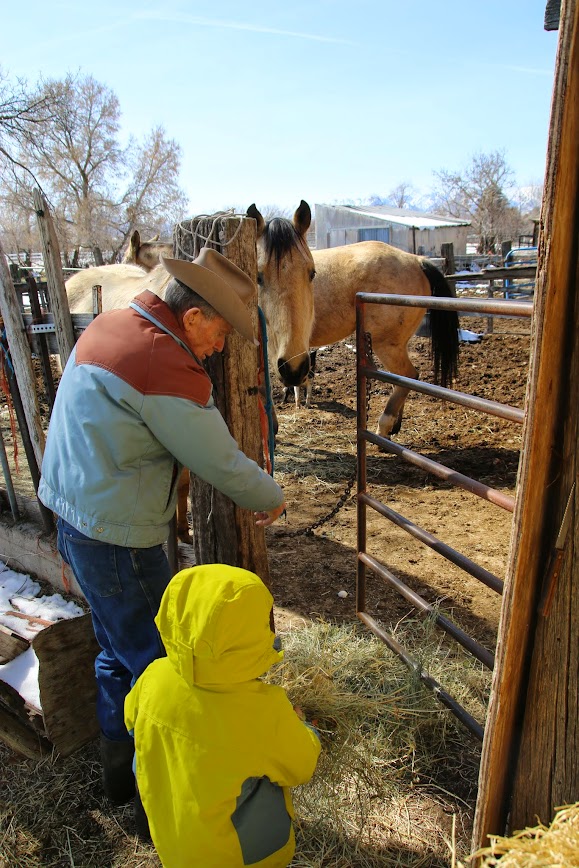 Teaching Scotland how to feed the horses. 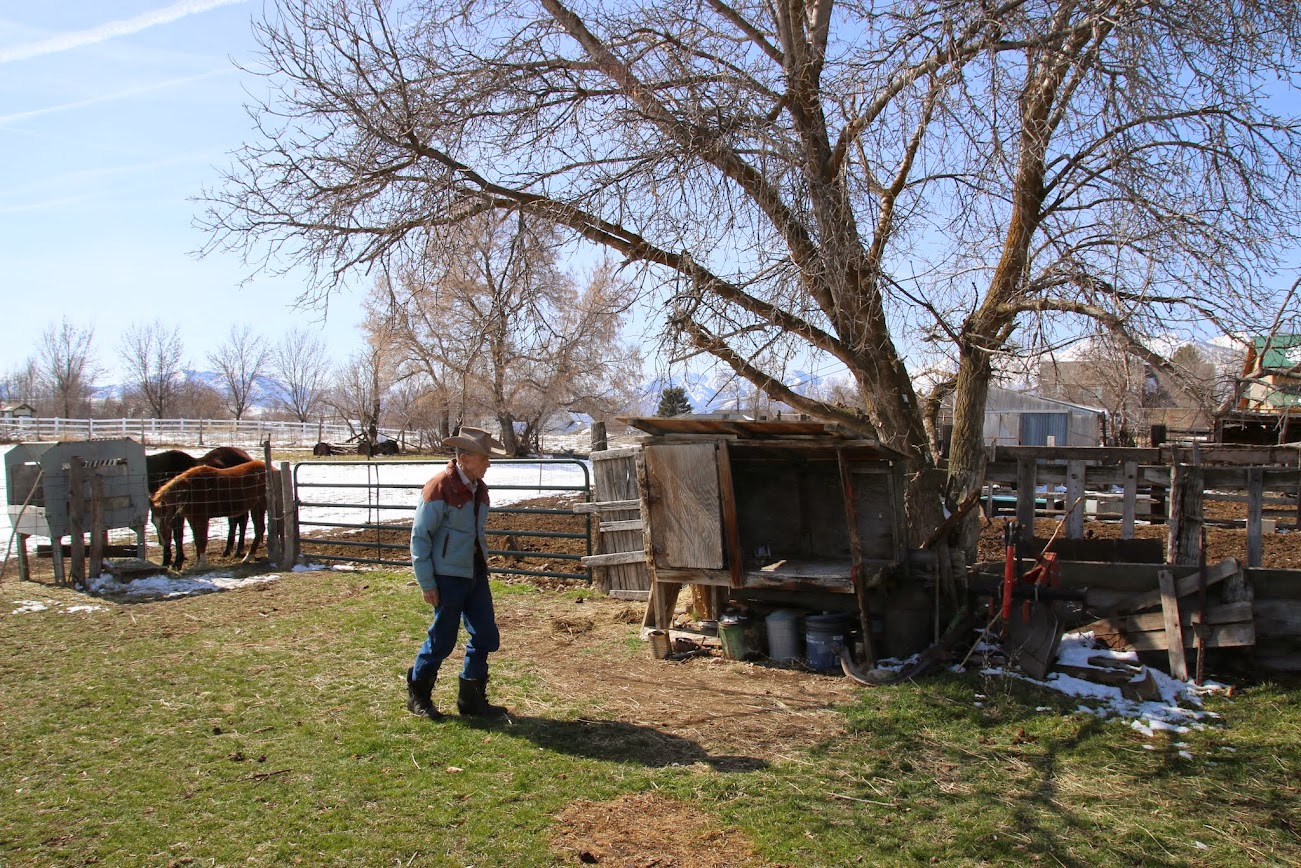 My grandfather has Parkinson’s disease. His whole body was covered in an itchy rash when we were there, but you wouldn’t have known if he hadn’t told us. His determination to still be a grandpa- taking the boys outside, giving them treats, and taking them up on his lap to talk to them always touches my heart. He spoke deeply and sadly of friends and family members of his who have recently left the church. He bore his testimony of the priesthood, of the truthfulness of the church, of the joy it brought to his life. I love this man! 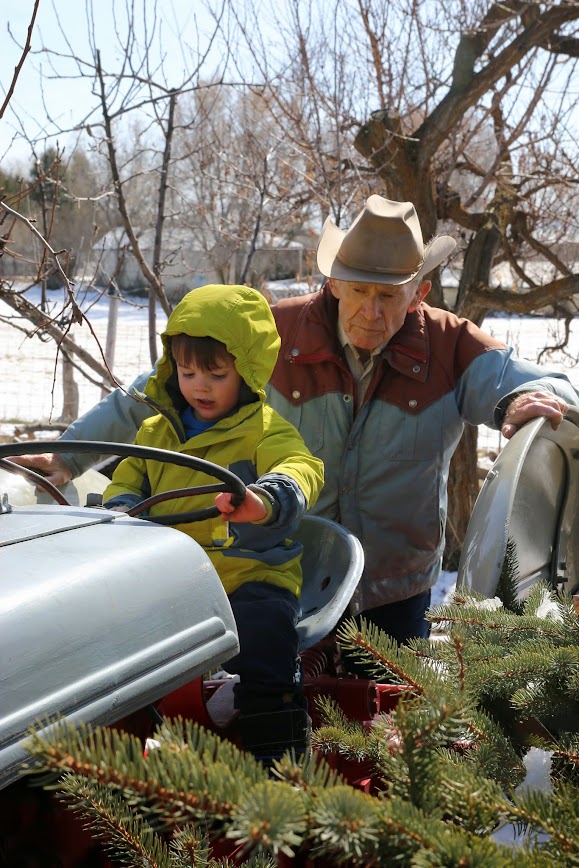 Showing him how to ride the tractor. 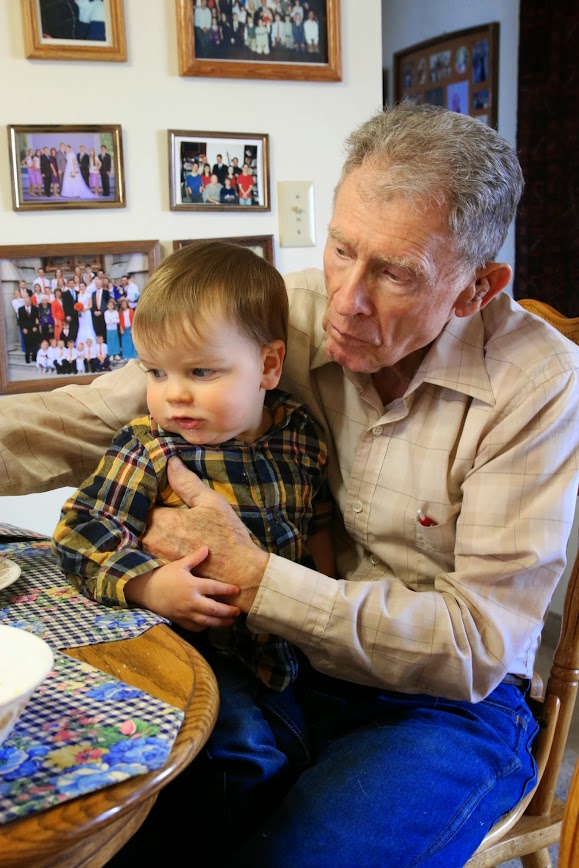 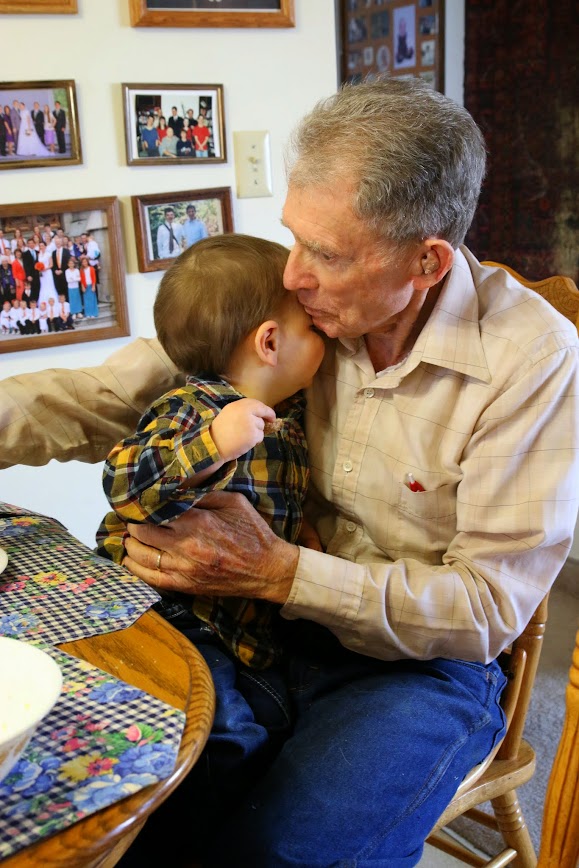 One of the things I love about Anders is how free he is with affection. When Grandpa leaned in to give him a kiss he nuzzled his head into his shoulder. 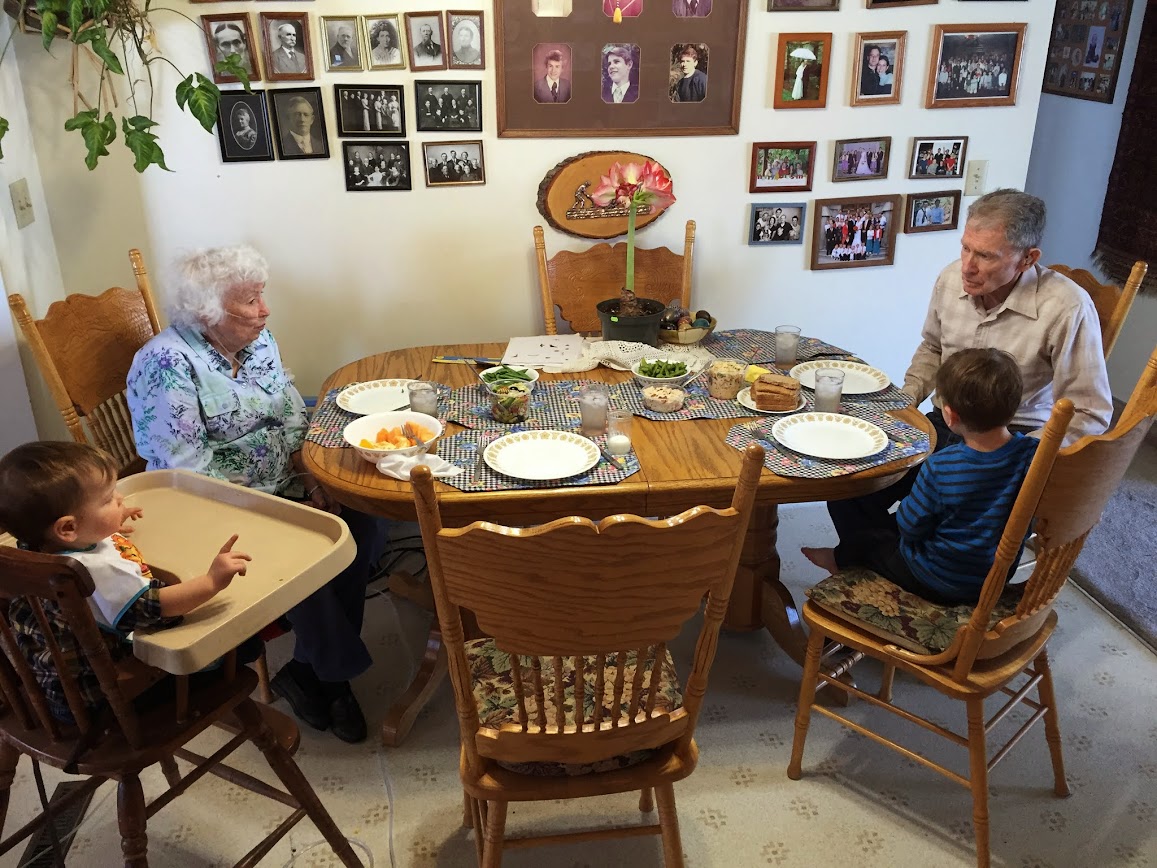 I’m not sure why but this picture really means a lot to me. I spent two summers with my grandparents, and we ate nearly every meal at this table, with these plates and these placemats. The seating arrangement was the same, except this time I had my two boys with me. The prayers and conversation were similar. I’m just so grateful that my two boys will get to experience a bit of the peace and stability that resides in this home, around this table. 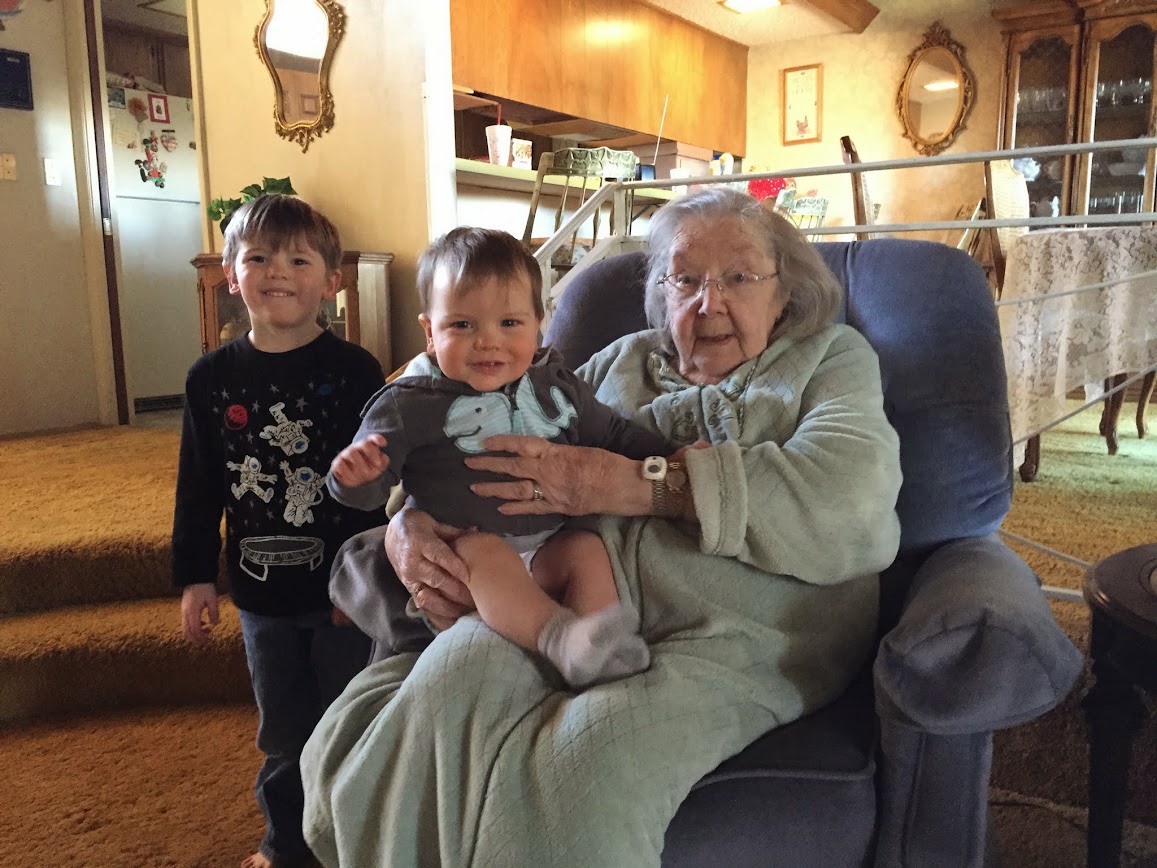 We also got to have lunch with Grandma Petersen. It was a shorter visit than I would have liked- her houses is NOT baby proof, and the boys were high energy and rambunctious. But she smiled and laughed at their sweet displays- Scotland’s acrobatics and Anders abundant blown kisses. She encouraged Scotland as he colored in his coloring book and made sure the boys had plenty to eat during lunch. Her eyes sparkled as she watched Anders tottering about, and enjoyed Scotland’s lively conversation. As he sat next to her at the bar stools, waiting for lunch he asked her. “So, what games did you play when you were a kid?” (A question I had suggested he could ask Grandma and Grandpa Harrison a few days earlier.)  It was great to see her and get to express our love, if only briefly. It felt good to be in her home, so full of memories for me.