A name and a blessing for Chiara 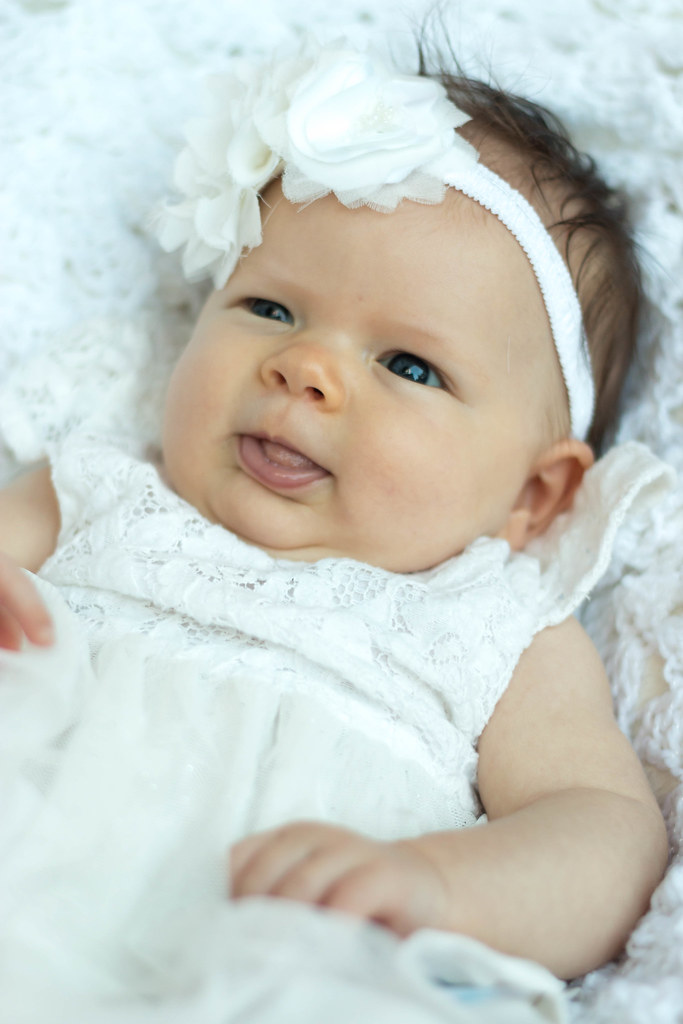 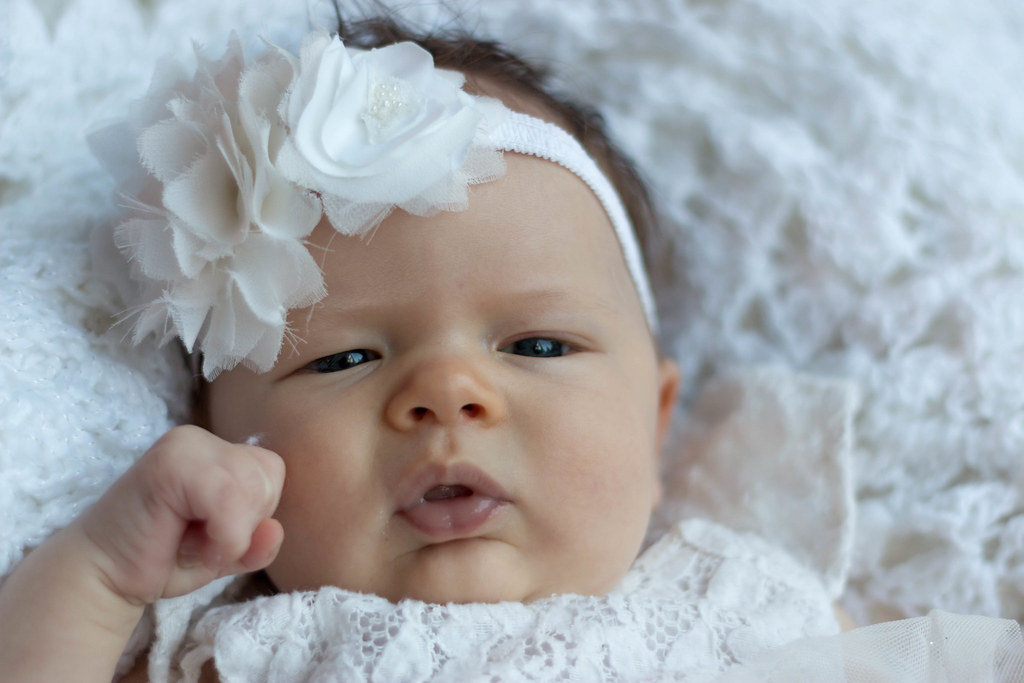 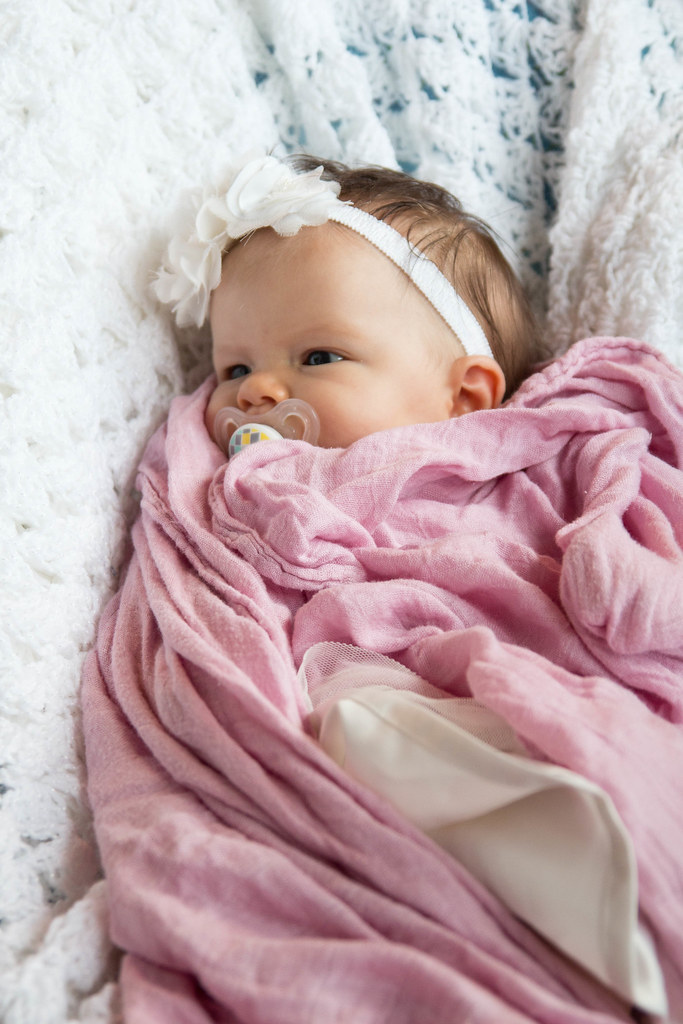 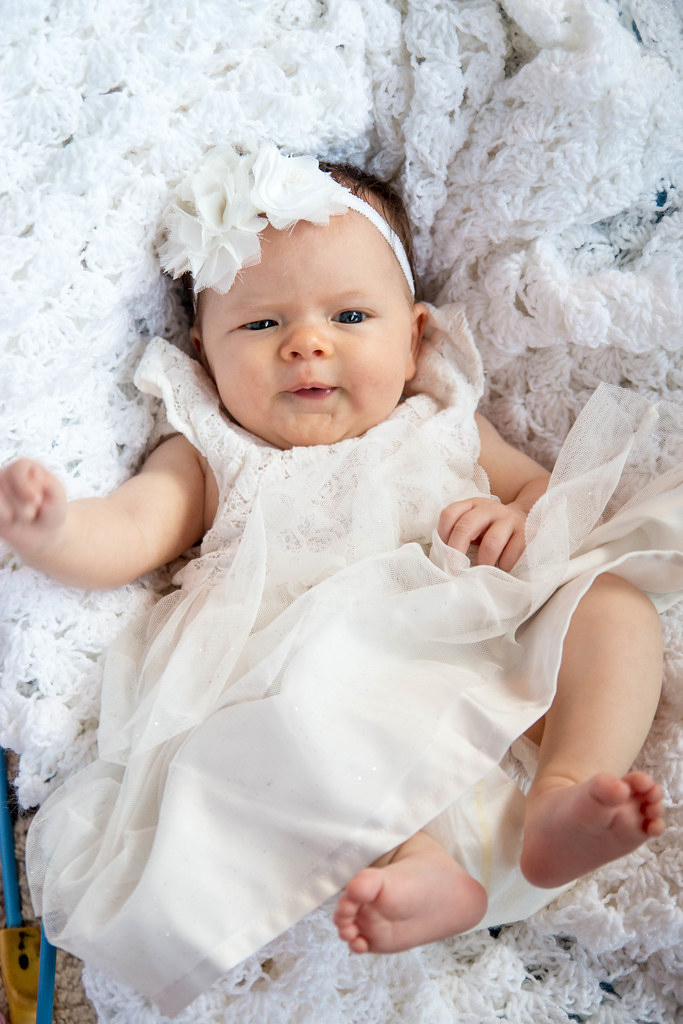 In our church there is a tradition of giving new babies a name and blessing in front of the congregation. Similar to how Christ was  presented at the temple, but without the animal sacrifice. It’s a lovely tradition and one all look forward to, the family of the child and the congregation. Traditionally, the babies are dressed in white. The name and blessing isn’t essential and isn’t an ordinance or covenant, but for me it is an act of hopeful foreshadowing.
We had a lot of family come out for Chiara’s blessing. Tom’s Dad flew in, and my parents, and two siblings came. It made for a lovely weekend. Wanting to treat them all to some fun Seattle adventures, while also making it kid friendly, we decided to visit one of my favorite local parks for a morning hike. The weather was beautiful. The adults enjoyed the chance to chat amongst gorgeous scenery, while the kids had a blast romping about in the stream that flows through the park. It was one of those times when I felt so proud of where I live. Being able to drive ten minutes and be surrounded by seclusion and so much natural beauty is one of the things I love best about Seattle. I think we’ll be visiting this park a lot this summer! 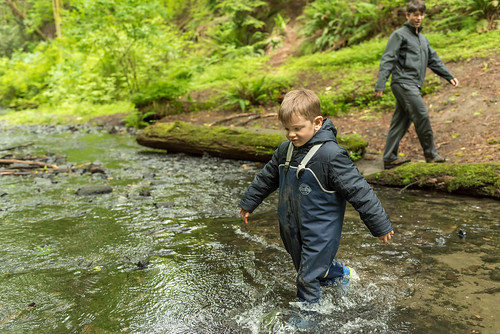 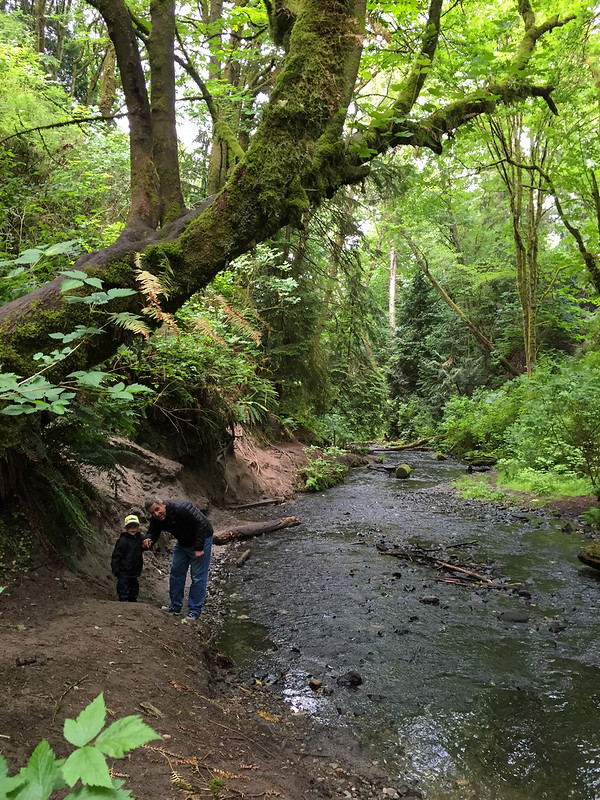 I was nervous that Stan, being the only attendant from Tom’s side, would feel awkward surrounded by my family. But I needn’t have worried. He showered attention not only upon my boys but my nephew Keiton. He and my Dad shared long conversations. He took as many opportunities as he could to hold Chiara. He cuddled with Scotland, and told the boys bedtime stories.

Furthering the Seattle experience we hit up a Pho place nearby to give many of our guests their first experience with Vietnamese food. The food was tasty, and watching the kids eat noodles with chopsticks was entertainment enough! 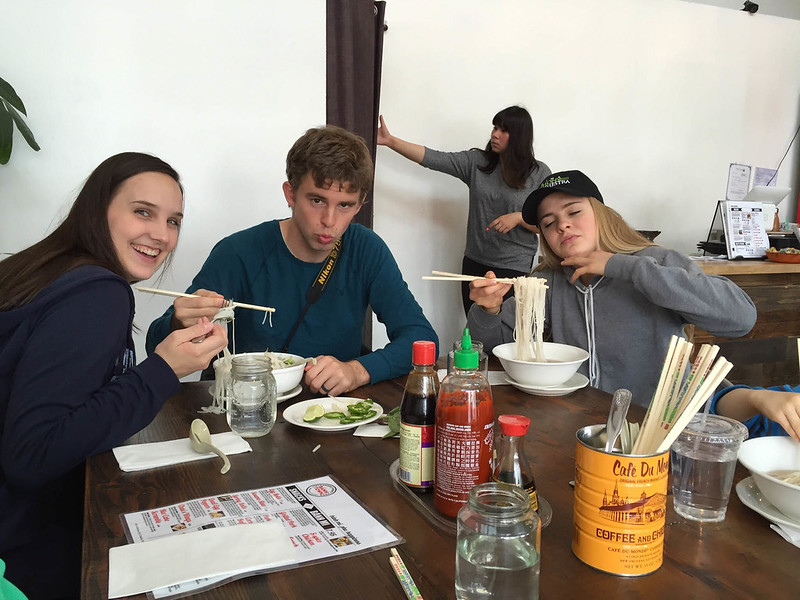 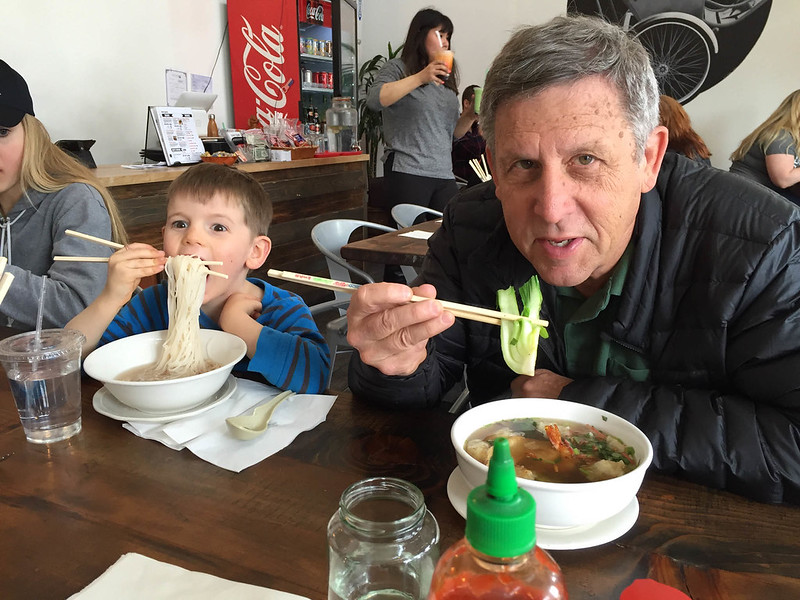 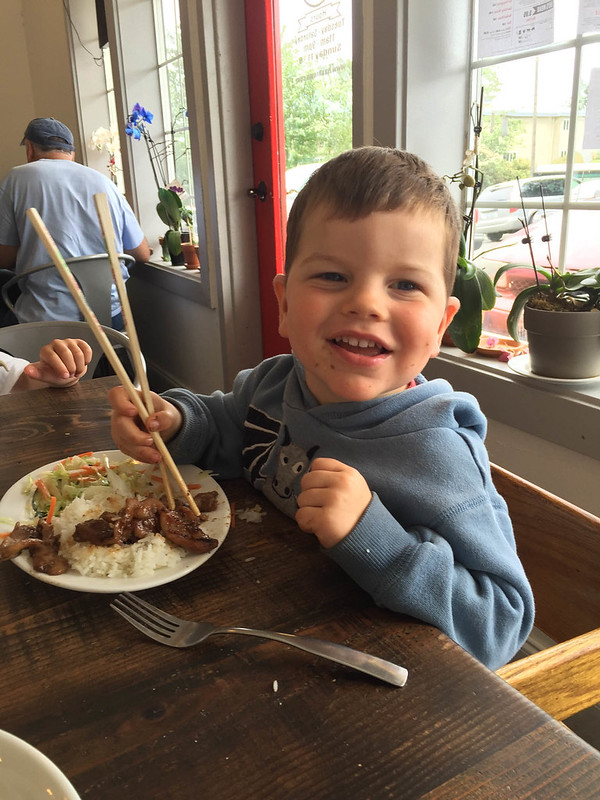 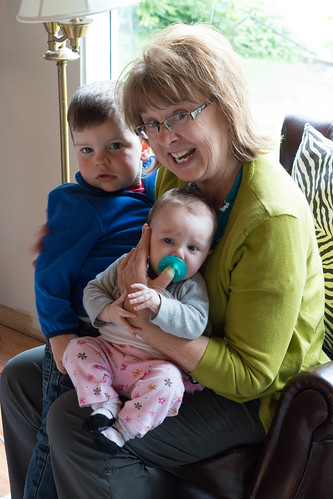 Anders adores his Grandma and they have a very sweet relationship. He wasn’t too keen that she often had another baby on her lap, as he’s always been her baby in the past. We got to meet Bria for the first time. She’s such a doll, and Scotter loved how easily he could make her smile. (He’s taken to heart that he’s “good with babies.” and takes every opportunity he can to interact with them.) 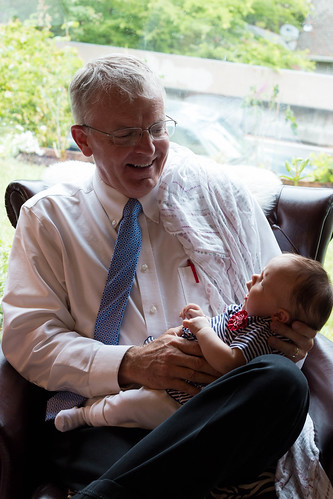 In all honesty this was a photo op. I handed Chiara to my Dad and she was happy for about three minutes. She’s a major momma’s girl, and few had success holding her for long. 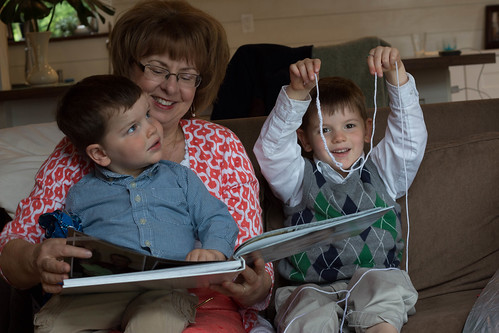 My Mom “read” Anders his “Andy book” half a dozen times, and gave Scotland his first crocheting lesson.
Sunday was an awkward day. We have church at 1:00 which left us with a long morning. We fixed a tasty crepe breakfast- and then there was a lot of waiting around for the “event.” Looking back I wish I would have used the morning to photograph Chiara in her dress, and take some family shots. We ended up taking them after church – which meant Chiara wasn’t in the dress she was blessed in (because she soiled it second hour.) And it was a bit rushed, but thanks to Devin and Jessica’s impressive photography skills we still managed to get a lovely photo of the group. I would have liked to have gotten a picture of Chiara and all those who took part in the blessing. As well as one with just her and her brothers, but people needed to head out, and she hadn’t been very accommodating. I’m still hoping to do a photoshoot of Chiara in her actual blessing dress. The one you see here was a backup- it’s a 9-12 month size. 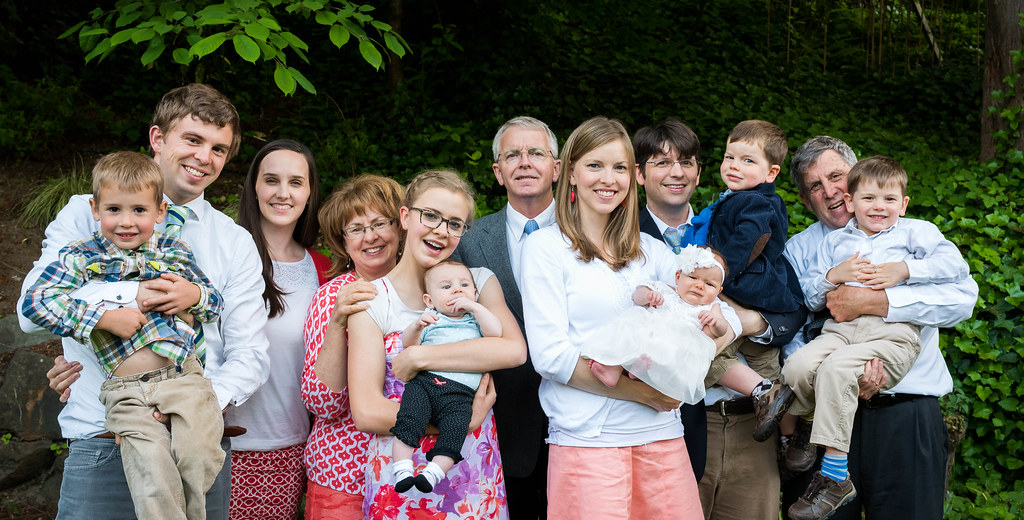 When the time came to go to church, my mom came with me into the dressing room to dress Chiara. Chiara wore the dress my mother made for my sisters and I, a necklace Brigette made for her, and a headband I made for her. (From the same fabric and lace from which my wedding dress was made.) My mom also crocheted her a gorgeous white blanket, but it ended up being too big and cumbersome to use for the actual blessing. She looked beautiful, and I was so proud. It was a sweet moment being in the mothers’ room with my mom, preparing my little girl. It reminded me of when my mother helped me dress in white before I received my endowments in the temple. I look forward to the times in the future when I’ll again help my daughter dress in white, for her baptism and then for her temple endowment, and sealing.
With my thoughts turned to Chiara all morning I hadn’t thought to prime the boys about what was going to happen and how they should act. Or to make a plan to split them up as there was plenty of family to help with them. Scotter ended up being a pill- and kept elbowing Anders which caused him to yell out, which caused me great consternation. (Scotland, unfortunately, has a history of acting out in sacred moments.) I ended up missing the middle section of the blessing because I was separating the two boys, Scotter being particularly naughty. Chiara, as we expected, screamed throughout the entire blessing. The mic went in and out. But Tom forged on and offered a beautiful prayer in her behalf. I was proud of him for continuing with the blessing despite the distractions. It would have been easy to just end it quickly, to spare everyone the distress of hearing her cry for so long. But he knew what was more important, giving his daughter a beautiful blessing to lay the foundation to many more blessings throughout her life. While I missed the middle section, (and had to say a brief prayer of my own to calm my frustration with the boys) I felt the spirit strongly witness to me of the worthiness of my husband. You’d think I would have thought more of my daughter, but my greatest impression was of gratitude for a Priesthood-holding husband, who was willing to call upon the Lord’s power, despite distraction. My heart went out to Chiara who was so distressed by the end of it all that she was shaking. It didn’t take much for me to calm her, she’s such a Momma’s girl. (Barbara Bradford, the grandmother of the ward, came up after and said, “They should just have the mothers hold the babies. Someone should suggest that!”) Knowing how frazzled she gets with others, I really should have asked. 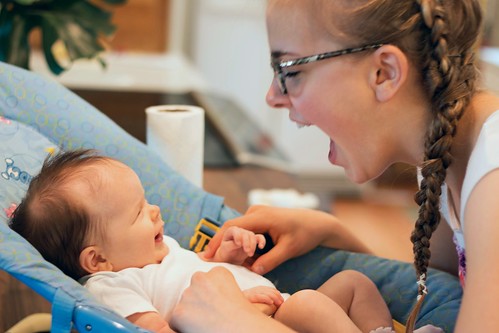 There are few things as gratifying as seeing two people you love, love each other. It always means the world to me when my siblings make the effort to get to know my children. 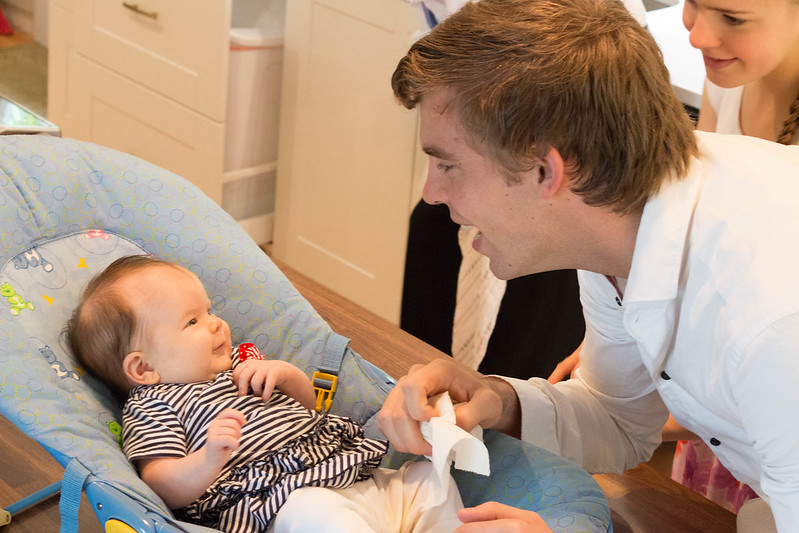 Devin is to thank for all the best pictures in this post! 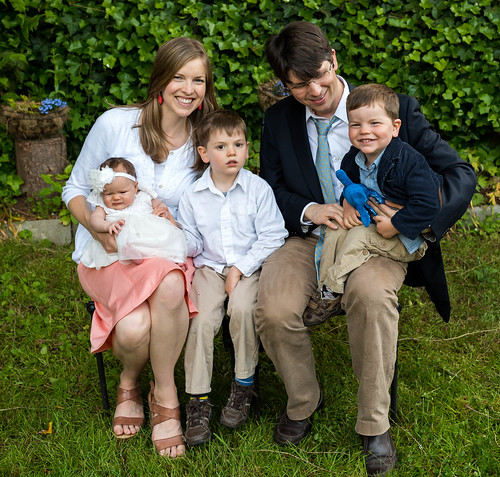 Our family of five- in case you’re wondering, my legs haven’t been cut off and sewn on the incorrect side, they’re just awkwardly crossed.

If I’m honest, I was a bit disappointed in the way the blessing weekend went. In my attempts to be “relaxed, and chill” about everything, I hadn’t planned things out enough. I’d hoped for a nice celebratory meal after church, but didn’t really consider that doing so would require me to make everything before hand. (Because most didn’t eat lunch and were really hungry after church.) So rather than a nice “formalish” dinner it was a stand around and eat a small bowl of soup in a paper bowl, type of deal. With all my attention placed on getting Chiara ready I didn’t take time before church started to teach my boys about the name and blessing and prepare them for what to expect or how to act. As a result the whole experience was lost on them. As a result, I didn’t get to experience it either. I didn’t ask anyone to take notes on the blessing. Tom’s recollection of what he said is all we have.
The weekend was also a bit stressful because, naturally, everyone wanted to help with Chiara and have their “moment” with her, but she only wanted to be held by me. With the demands of hosting – answer questions, and attending to guests, I wasn’t as quick with responding to her cues. I spent much of the weekend calming her down after some well intentioned guest tried to hold her. 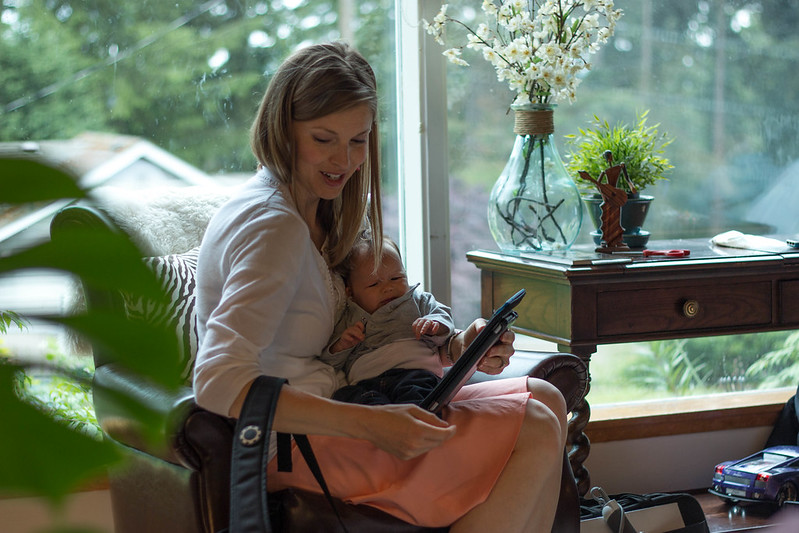 Devin took this last picture of me. I really like it, because it captures me right before we were readying to leave. My mind is turned to the list of things I’ll need for the day: diapers, wipes, activities for the boys, the dress, headband, blanket, a back up dress, spit up cloth, camera, etc. I’m smiling, while balancing a baby, a bag, and stuff for the boys. You can’t see them but I’m surrounded by family, all wanted to help. But no one knows what I need to prepare, no one can hold the baby without her screaming. It’s how I feel often, overwhelmed but unable to delegate.
As I mentioned, Chiara is a momma’s girl. I have cared for her 98% of the time in her near three months of life. Add to that the 9 months of gestation and we have quite a bond. I adore this little girl. I can’t kiss her squishy cheeks often enough. I’ll do anything for her wide-mouth smiles. I love napping with her on my chest. Her feminine coos and grumbles thrill me. But, she’s got a “good set of lungs” (as probably ten people commented after the blessing). And her strident cries completely unhinge me. There have been some incredibly intense moments since her birth when I have become overwhelmed to the point of tears at all that’s being asked of me. But paired with those moments are feelings of complete bliss while I sing her to sleep in my rocking chair, my mothering chair. Times of total joy as I see all three of my childrens’ heads forming a triangle as the boys coos and squeal at their smiling sister. This period of mothering is very physical. I’m exhausted at the end of the day, and sore in the morning. But I find myself often thinking “I’ve got to write this down, I don’t want to ever forget it.” Chiara is changing so quickly and while part of me is itching to start exercising again, teaching more, studying more, doing more, none of these things ever seem as important in the moment as savoring the feel of her breath as she sleeps on my arm, singing her to sleep and then rocking her long after she’s faded off, or waiting for her delayed coos as I ask her questions.
Unfortunately, Chiara’s blessing weekend was a good example of me getting caught up in less important details at the expense of the more important ones. And while I do it far too often, I’m determined not to let the pressures of the high-achieving adult world strip me of the slow sweetness of infancy.