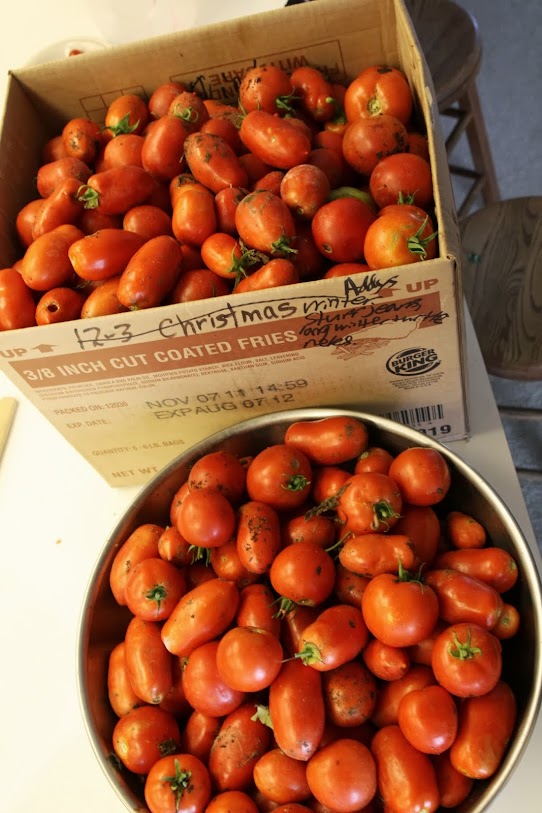 Two weeks ago, Scotter and I spent three days at my parents’ house. We went up to celebrate my Mom’s birthday, let Tom sleep in peace as he was working nights, and just absorb a bit more sunshine before the fall gray hits Seattle. My parents’ garden was overflowing with produce and being the waste not, want not person that I am, it just killed me to see so much of it going to waste. So, we started canning. I canned with my Mom alot as a teen, but haven’t done any since leaving for college. I canned for the first time alone earlier this summer- putting up 8 pints of jam- plum and blackberry. I always get a big nastalgic for food preservation around this time of year. The fruits and veggies all in their prime, the prices low, and the thoughts of oncoming winter always culminate to create this desire to hold onto summer, or at least package it up in a jar. So with this enthusiasm and poetic vision I harvested boxes of tomatoes and peppers. Being the experimenter that I am I scoured the internet for “ways to preserve tomatoes,” and came up with my list of things to try: sun dried tomatoes, pizza sauce, tomato sauce, and salsa. My one stipulation was that I wanted the stuff to be good. So I tried three different methods, I roasted the tomatoes, peppers, onions and garlic for one pizza sauce. And skinned and seeded the tomatoes for another cooking them down until they were thick and then adding in sauteed peppers, onions and garlic. I experimented with fresh herbs, and diversified my textures. Now don’t be deceived all of this experimentation didn’t result in countertops full of rich red jars of sauce, no my final product was frustratingly small, BUT the taste- fantastic! I’m giddy with excitement for that first winter pizza. I can see it, a snowy day (or more likely gray rainy day) our pellet stove warming the living room, some fresh dough rolled out and smeared with a thick layer of my roasted tomato and garlic pizza sauce. I can’t wait!
My three day sojourn into the world of canning was insightful. Here’s a few observations:
It’s a shame that canning is so time intensive that the very produce that we are trying to capture in it’s prime, so often goes uneaten in its prime, because there is no time to prepare it. (I was dreaming up meals complete with fresh green beans, grilled garden potatoes and fresh pesto. But pizza and quick bean burritos had to suffice as all our time was spent picking, cleaning, and preparing the food for canning.
I find the idea of homesteading attractive. I follow a blog of a woman who is working towards complete self sufficiency. I like the idea of growing a huge garden, having an orchard, and chickens, but then I don’t. I like the fresh eggs and produce, the joy of reaping the fruit of one’s labors, but I don’t like feeling strapped to the land. I love that I can escape into this country life where the fruit comes by the bushels and the tomates by the peck, and then return to my city life, where I spend my Saturdays taking a ferry to the other side of the Sound just so we can sit at the playground and chat while Scotland plays followed by a crepe at a local creperie, all without thinking about the tomatoes rotting on the vine back home.
I want to can, and teach my children to can, as a nod to their heritage. When I can I feel at one with my mother and grandmothers. I know, it sounds hippy, but I live in Seattle after all! But really, it’s kind of like childbirth- you suddenly have this awareness of a whole new world of womanhood. A reality of womanhood that carries you back through the generations. Canning carries a bit of that for me. I think of the hours my grandmother must have spent canning pickeled green beans, beets, raspberries, peaches, applesauce, carrots, ect. I think of my mother who canned because the produce came free, and she knew the money she saved on grocery bills in the winter would help pay for her kid’s activities. Then I think back farther to when canning was the only way of preserving certain foods to eat during the winter. The option of just picking up a jar at the grocery store wasn’t an option, even if you had the money. And it makes me grateful, one, that I don’t have to can; and two, that when the going gets tough I can think of these women and know “I can do hard things.”
I love the appreciation doing something yourself gives you. Just the week before I was grumbling about the cost of jarred spaghetti sauce. We typically make our own, but I like to keep a couple of jars of the canned stuff on hand for calzones. After spending three hours to only produce five pints of pizza sauce, I thought. Okay, it’s worth that price! It’s like the first time you realize that it takes a good six months from seed to ripe tomato, and you suddenly quit balking at the price of produce.