First “official” day in nursery. (He’s been attending for a month. Shhh. Don’t tell!)
My baby turned a year and a half this week. And boy is he a proud to be a “big boy.” He struts around after , everyone like he’s one of them. He’s talking up a storm and mimics constantly. (Every time Scotland comes over and shows me his latest LEGO creation and tells me about it, Anders will immediately bring over the DUPLO he’s working on and chatter on about it.) He continues to be a total ham, bringing smiles and often laughter by most who see him. He’s officially a runner, watching him run down a hill the other day, his belly jiggling and his cheeks flapping with the movement is a sight I hope to never forget. He and Scotland like to “do their exercise” racing each other back and forth down the hall. Anders has started saying his version of “Ready, Set, Go!” The inflection is dead on, but only the “go” is clear. 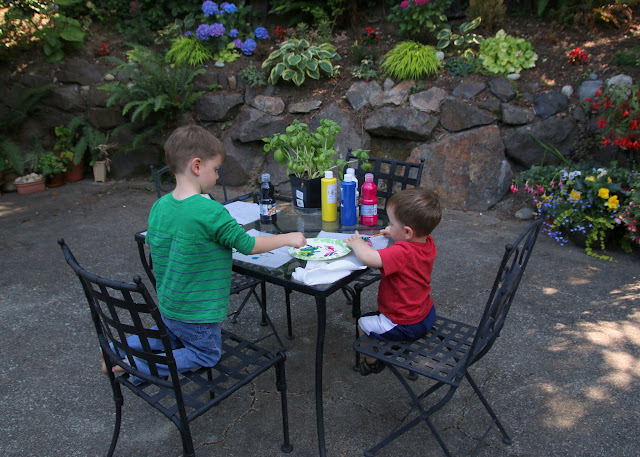 Anders sees absolutely no reason why he shouldn’t be able to do exactly what his brother is allowed to do. And he gets VERY angry when I tell him he’s not old enough yet.  He was thrilled to be included in this painting project, and was very intent and focused. Unfortunately, this experience taught me that tempera paints don’t wash out. I guess he has a permanent painting outfit now! 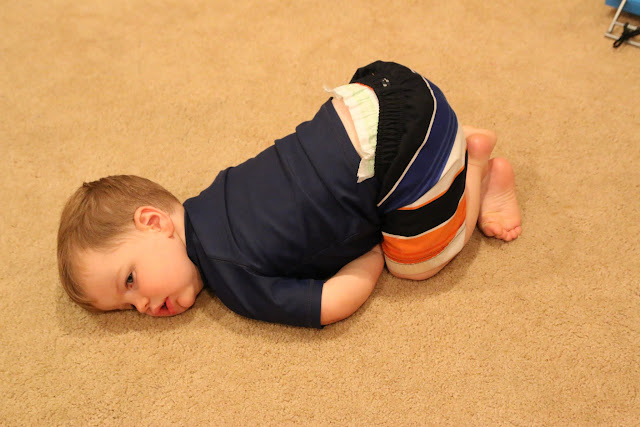 This is a terrible picture but it captures Anders sleeping position of choice. He always goes to sleep like this. Feet crossed, bum in the air, arms to the side. I guess he needs to make room for his belly! 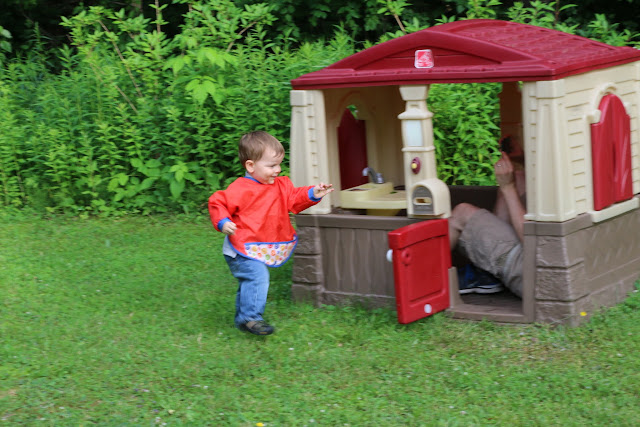 The house we rented in NH had this little play house, and Anders made singular claim on it. (Adrienne has a hilarious video of him closing the door, and shuttering the windows when she came over to visit!) He spent hours and hours in here. He created this little routine that he would repeat over and over: open the door, walk around and grab leaves, open the shutters, place leaves in the sink. Walk in the house. Close the door. Sit down next to the sink. Repeat. Repeat. Repeat. It’s Tom you can see sitting in the house above, and he said Anders performed this little pattern some ten times. 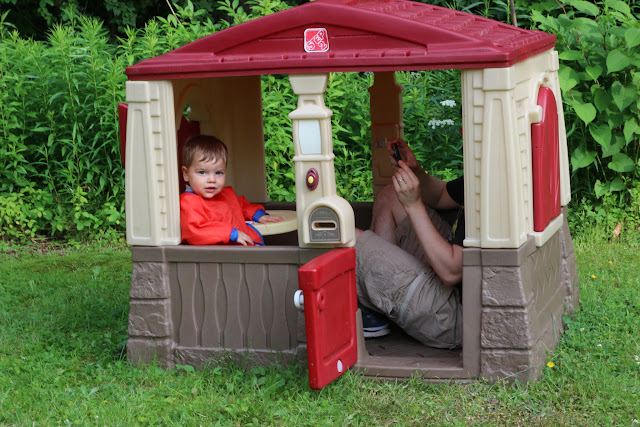 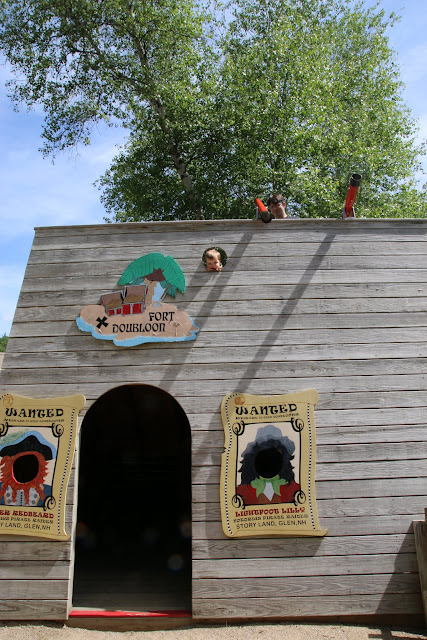 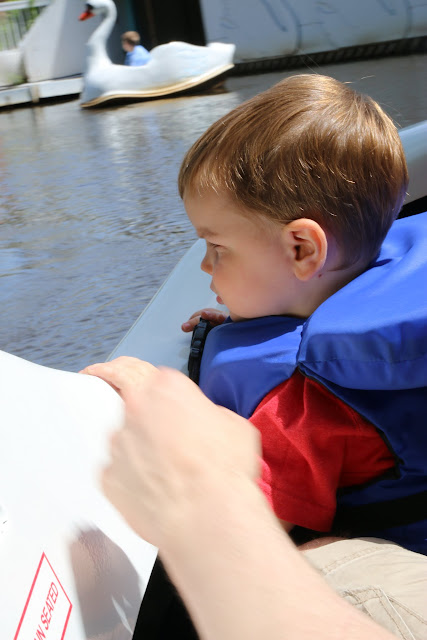 His thinking face.
Anders is like Scotland in that he has this distinct thinking face. (Maybe all kids are that way, I wouldn’t know better!) More and more you see him examining things trying to make sense of them: the button that closes the garage door, the wheels on the stroller, the hook and eye of his duplo train.
He’s recently figured out how to assemble DUPLO and he’s beyond thrilled about it. He primarily loves building trains, often applauding himself when he gets a guy to stand up on the train, or finally gets a piece to adhere after a few tries. Other time he’ll raise both hands above his head and cheer. He’s always very proud of his creations, and as I mentioned early, typically finds me to show me what he’s build. He has a distinct train sound that he makes as he moves them around. 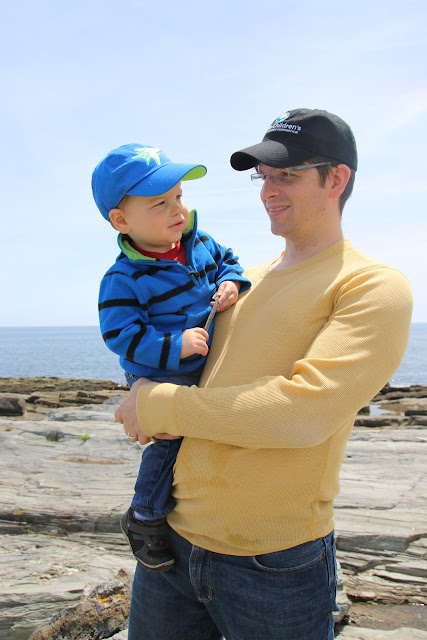 He continues to be an outdoor boy, often requesting to go outside as soon as he wakes up. He can now open the back door himself, and will often go out and play in the sandbox for a bit, or ride his bike. Scotland and he have figured out how to communicate when Anders needs a boost and they can now navigate our entire yard together, despite the rock walls. He loves harvesting in the garden. I’m hoping a few more green tomatoes will convince him that picking the red ones is a better idea! He’s learned about the native huckleberries that grow by the fort and will request I pick some for him when we’re up there together.
He continues to love balls and cars. He loves to play pass, and identifies “Ball” in all circular shapes, wherever we go.
His eating habits have improved. I’ve learned that he’ll gobble down stir fried and steamed veggies if they’re pureed. He now understands the concept- you can not have more X, unless you finish your Y. (Though he acts like he doesn’t every time!) He does NOT like to be fed, and will throw a fit when I suggest I want to feed him (to prevent mess). He’s a very messy eater and has a bad habit of throwing his plate when he’s done, though this is improving. (Drives me bonkers!) 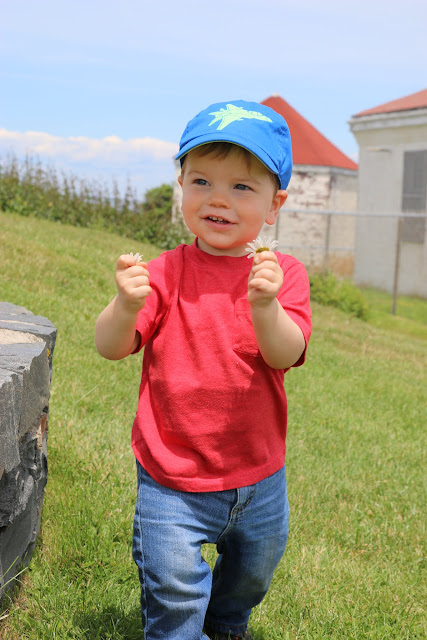 He says: go, hi, bye, car, ball, where’d it go? (his most common phrase), Her’dis!, ma (first thing he says when he wakes up), Dada, blankie, thank you, Jesus, shoes, NO! (I used to think this was his automated response to anything asked of him, but it turns out he must genuinely NOT want to do most of the thinks I ask him, because when I say something like “Would you like a cookie” he quickly nods his head (so deeply his chin hits his chest) and says “ya.”  Don’t, WOW!, okay, oh! let’s go!
We often play the game “Where’d it go?” whether it be picaboo, or looking for his shoes. He’ll always say in a really high pitched voice with his hands out “Wher’dit go?” and when he finds it, or uncovers his eyes, he’ll say in a lower pitched voice “Her ‘dis!”
The other day in the car, Scotland asked: “Mom when did Anders get a lower voice than me?” “What do you mean, bud?” I asked. “He just said (in a low voice) Where’dit go?” 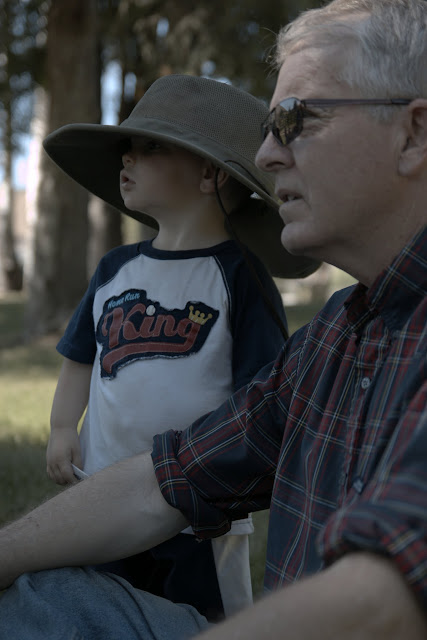 Hangin’ out with Poppa, and wearing his hat

He’s rather particular. In the morning he’ll cry for me to come, but as soon as I enter his room he’ll flop back down into child pose, and close his eyes. But if I say “Oh, are you not ready to get up yet” and walk towards the door, he’ll sit up and start crying again. He likes me to kneel there next to his crib and wait until he’s ready. We play games where he’ll stick his arm through the crib and I”ll kiss his hand. It’s our sweet time together. 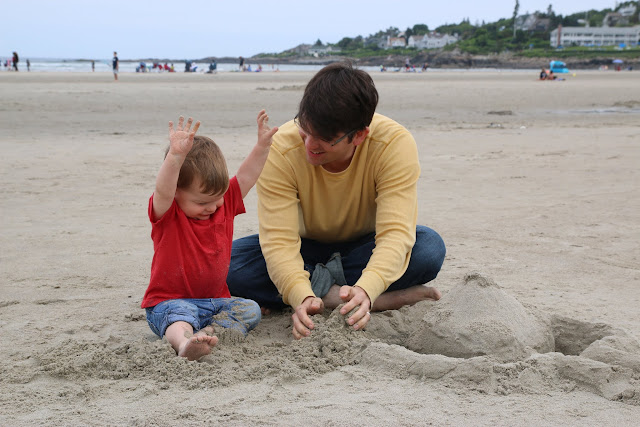 He has four teeth up top. He just cut his fourth tooth on the bottom, and he has all four molars.
He is super social and says “Hi” and “Bye” to everyone. He’s gotten such a positive response to his friendliness that Scotland has started to join him in the act. I can assuredly say that Anders has single handedly increased the number of smiles in our house by a large margin. And we were already a pretty smiley family before he was born. 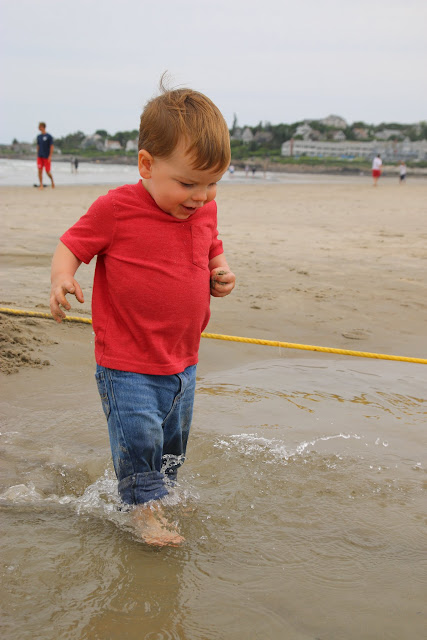 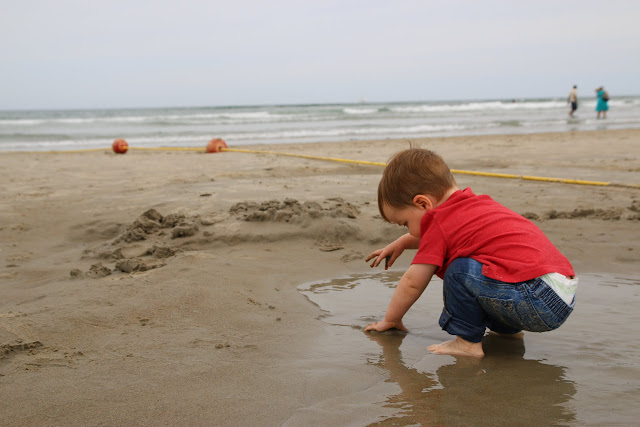 He will do anything for a laugh, and once you laugh he will do it over and over and over. Like the other night, I was fixing dinner, and he started doing a three legged down ward dog. Scotter and I chuckled, so he started spinning in circles on his feet and hands lifting up his leg every quarter turn or so. We laughed and laughed- and he loved it!
He’s never been one to watch any TV, but Scotland has recently taken an affection for Wild Kratts, and Anders quite enjoys it too. (He particularly likes the parts with footage of live animals.) It’s darling seeing him sitting there, a little couch potato watching TV. It rarely lasts over ten minutes. 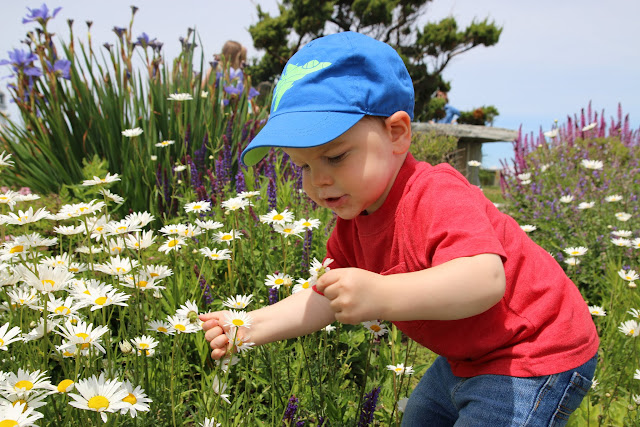 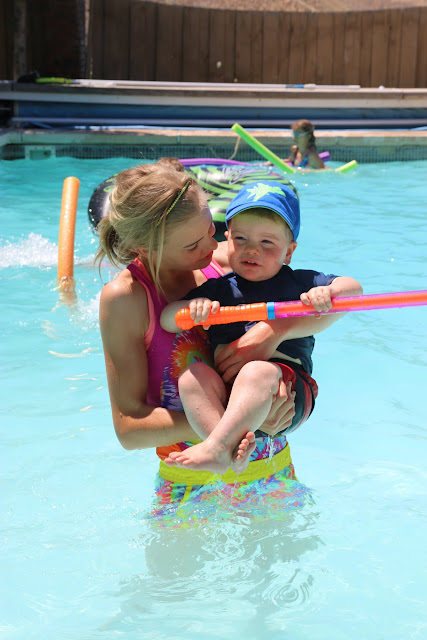 His friendliness and flirtiness make him much loved. His Aunt Dantzel particularly adores him, and he her. The young women in the ward always gush when I’ll ask if they’ll hold him, and he’s always sure to ham it up and get a laugh out of them.
He says sweet prayers. He’ll put each hand on his chest, bow his head, and mumble quietly to himself! 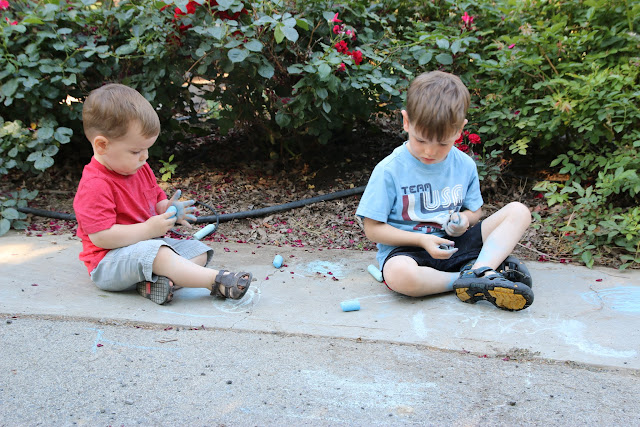 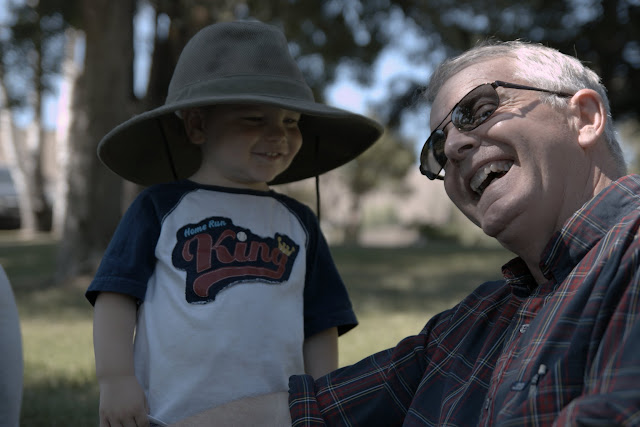 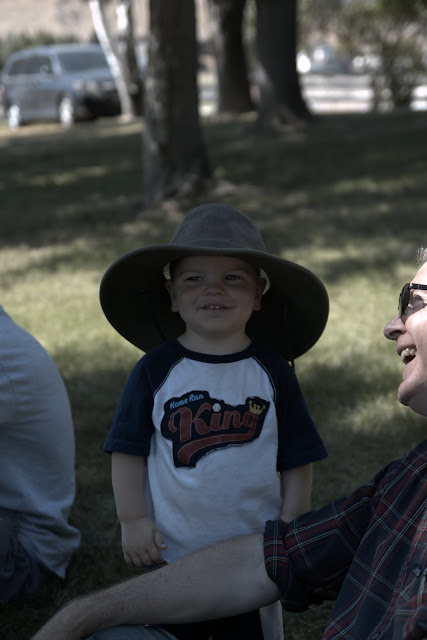 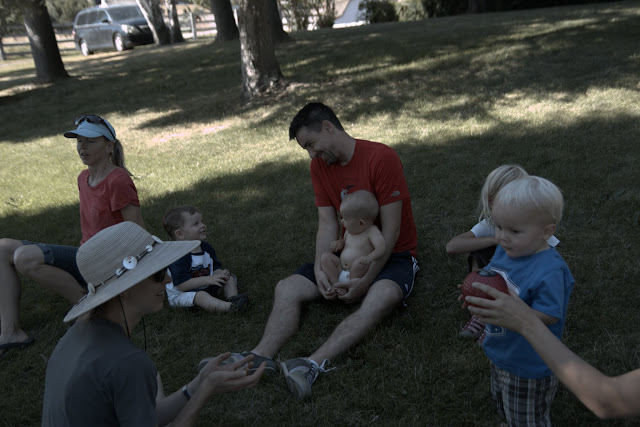 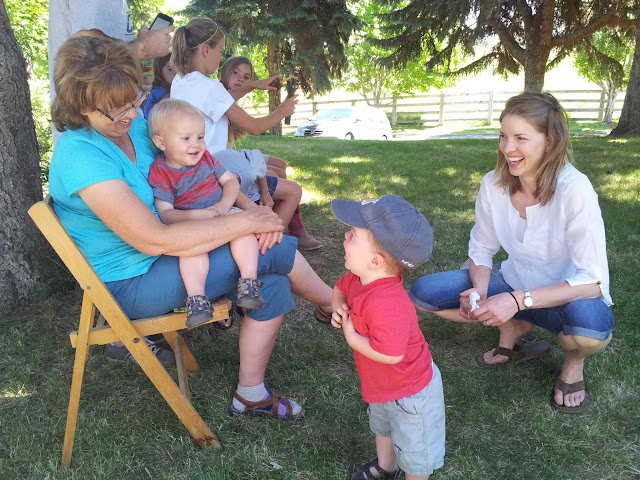 I love these last few pictures because they really capture the effect that Anders has on people. You just can’t help it! I can’t tell you how many people laugh out loud at his tilted head, squinty eyed, dimpled grins. (He’s apparently learned that his more exaggerated ones get better laughs, so he usually goes there first!)

We’re all absolutely in love with Anders. He has brought such an added measure of light heartedness and jovialty to our home. He’s strong willed and opinionated, hilarious and silly, sweet and affectionate, rebellious and naughty, obedient and attentive, social and friendly. But most of all, smiley. Happy half birthday Anderoo! We love you.